The Girl on the Train: A Novel by Paula Hopkins 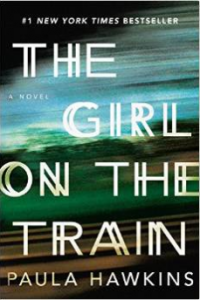 First, what is this new trend with sticking ‘A Novel’ on the cover, I mean, is that really necessary? I know it’s a novel. Second, I saw a trailer for this briefly and it looked intriguing enough that I downloaded a sample. Third, I read the whole thing in one sitting. 3 AM whyyyyy? Well that means it’s a good thriller right!

This is the first time in a long while I’ve tried this genre because I don’t really read mysteries or thrillers anymore. I went through a period (years and years actually) where I just inhaled them, but I really had to stop because my brain was so full of icky who-dunnit deaths and scares and horrid images from talented authors stuck in my already over-active imagination. That and the increase of super lurid details in modern fiction that was just really making it hard to find a thriller to read (think mental scarring from The Girl With The Dragon Tattoo series – I’ve been on hiatus ever since from thrillers actually.)

When I saw that the trailer for ‘The Girl on the Train’ was first a book I figured it was a safe bet that it was well-written. (I had that thought with ‘Gone Girl’ too, which I also read in one sitting and it put my head into a tailspin; but I forgot about that -blocked it out- before delving into ‘The Girl on the Train’, oh well)

Right off the bat Hopkins describes the thoughts and actions of an alcoholic with such tragic clarity I found myself cringing. Rachel is a divorced woman who is having a hard time getting back on track. A really really hard time. Everyday she takes the train to London where she lost her job four months ago, so that her roommate won’t suspect anything is wrong. The train stops just where she used to live. Her husband and the harlot he left her for live in her old house and talk about rubbing salt in the wound, she sees it every day. Of more interest to Rachel though is the house four down where she can see into the backyard. A Barbie and Ken couple live there and Rachel has created a total fantasy in her head about these people, their perfect lives, and how amazing their relationship is compared to the one she lost.

Rachel is a complete and total nutter in addition to being a terrible day drunk. Each morning Rachel shrivels up inside a little wondering what she did last night, what she said, how she got home. Did she call her ex again? Did she send him a nasty email? One Saturday evening Rachel binges again and by now the reader is thinking ‘noo Rachel, don’t do it!’ because Rachel thinks, ‘I’m going to go to his house!’ The house of the ex that is and the new wife (the harlot) and the new baby.

Rachel wakes up the next morning with cuts, bruises, dirt under her fingernails, no memory whatsoever of the previous day except for maddening glimpses into her blackout. And worst of all, most shocking ‘Barbie’ is missing. Remember Rachel headed to her ex’es house four doors away. This is the beginning of the story that spins the reader round and round with increasing speed. Rachel is also a massive creeper, to add to her other lovely qualities and she throws herself headfirst into the disappearance of her imaginary heroine- now made real in the worst way.

Hopkins skillfully divides the book into three points of view, from the three main women; Rachel, ‘Barbie’ (my name for her, it’s really Megan) and the harlot (also my moniker, it’s really Anna). As each viewpoint brings us closer and closer to why Megan went missing that Saturday night, each character is drawn tighter into the web. The massive chore of a writer of a mystery is keeping the key from the reader, while dangling it just enough that you keep trying to figure it out. This is so well done here, in my opinion. The threads that lead to the truth are I think revealed just at the right moment. It isn’t totally last minute so you don’t have enough time to really relish it, instead the suspicion dawns on you and you have to wait to see it played out. This is done I think really well by revisiting the same scenes over and over in the plot. This keeps Rachel and the reader both confused. She really needs to sober up for things to start making sense, but she isn’t a total blunderer either. By the end of the book, the tension is so palpable, when Rachel jumps, you jump.

Something I thought was interesting was the character of Megan. It’s well known that mysteries and thrillers play out better when a woman is at stake. Preferably a young and beautiful one, but one you don’t care about enough that if something horrid happens she isn’t the main character. This plot device is difficult because while totally true, no one ever deserves to have something bad happen to them. So the writer has the burden of creating a real person with faults big enough to assure the reader that bad things come to wicked women; but making her vulnerable and real enough that the reader remembers this is a tragedy. If that makes sense. I think Hopkins did a really good job here. Every single woman in the book is flawed. No tragic heroines, no evil floozies. The only part I didn’t care for was the very last bit of the climax, but it didn’t ruin it for me. I just think it didn’t work, personally.

‘The Girl on the Train’ proves you can write a best-selling thriller without chunky gore or descriptive sex. I’m not looking for those things in my reading personally, and I’m happy to see that rather than take the arguably easier way of gratuitous scenes; crisp clear writing can cover these subjects just as impactfully. Thank you for that Paula Hopkins. SO. Caveats of my personal reading habits aside, this should please any reader who likes mysteries or thrillers, and then some.

I was born and raised out on the fringes of the rainy Pacific Northwest on fishing boats and cold beaches with only a dog and kittens for company, and so my love of reading and creating stories started very early. My dad would illustrate my early stories and I would listen to him ramble about European history and warfare, eagerly asking questions about Kings, Queens and our own family history. In my adult life I am wife to a brilliant and hilarious web designer and mother to two wonderfully weird children whom I am trying to pass on to my love of learning about the world. I'm an amateur genealogist, amateur photographer and amateur history major haha. I'm good at doing amateur stuff lol. During the last couple years I finally turned my life-long urge to write into a serious endeavor and finished my first novel called (for now) The Stone and the Stars, about a dying dystopian society, and one girl trying to escape it before it collapses. While I finish cleaning up the edges on my novel for the umpteenth time, and before I send it out into the world, I've lately begun a novel about utopia, this time on Earth. I'm finally living up to the nerdy book-worm title my family 'lovingly' pinned on me from the time I was small, and finally doing that one thing I feel like I was born to do. Cliche and silly? Yes!
View all posts by Deanne →
Tagged  Emily Blunt, Fiction, mystery, Paula Hopkins, The Girl on the Train, thriller.
Bookmark the permalink.