The Thousand Autumns of Jacob de Zoet: by David Mitchell 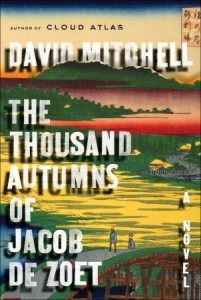 The Thousand Autumns of Jacob de Zoet is a curious book set at the end of the 18th century in Japan. The Dutch had an arrangement with the Japanese to trade but were not allowed onto the islands themselves except in rare circumstances. So the Dutch built little offshore islands (at least one in this case) built over sunken piles and connected to the mainland by a bridge. Here the Dutch traders set up a little city called Dejima where they would reside while goods, mainly copper in this case, were acquired then shipped off to Java – called Batavia at the time. The Dutch were stuck there in the meantime, anywhere from a year to five years.

Our main character Jacob de Zoet is a clerk sent by the trading company to square up the books. He left a sweetheart back home in the Netherlands and hopes to esteem himself enough in Asia to win her father’s approval. Soon though he finds that calling employees to account for their off the books deals is not likely to win him any favor, but he perseveres and immediately falls in love with an unusual girl named Orito. She is unusual in the way that she has been allowed to study medicine under the Dutch doctor at Dejima.

Unfortunately for Jacob, relationships between the two races is totally forbidden, as is Christianity. The Japanese went to great lengths to eradicate it from their shores. Jacob makes friends with a scholarly translator named Uzaemon who unbeknownst to him is a former suitor of Orito. When Orito’s father dies, a powerful magistrate buys his debts in exchange for Orito who is forced to a mountaintop shrine to live as a nun; except the shrine is actually a hidden source of some pretty despicable acts. Uzaemon and Jacob are both determined to right this wrong even before they know the evil that Orito is facing.

The Thousand Autumns of Jacob de Zoet as I said, is a curious book. I read that Mitchell spent four years researching and creating this vision of the relationship between the Dutch and Japanese and it clearly shows. One thing Mitchell does well is master his subject. Every scene is flooded with sensory authenticity and wordplay. I’ve come to expect no less from Mitchell, but I was puzzled as to where the story was actually headed, what it was all actually for.

The point of view changes abruptly several times, abandoning a well-crafted character to show the reader what else is happening. This was fine except that right up until the end I still wasn’t sure what the theme was here. I guess at the last I can say, this is neither historical fiction, thriller or mystery. Certainly not romance or horror. It simply seems to be ‘here’s something that happened to Jacob de Zoet when he was young’ and Jacob is a very fine character by the way. He’s tested by fire a bit and shows himself well.

Another odd thing about the book is the infrequent sections of extreme ew. Open the first page and the reader dives into a childbirth gone very wrong complete with a diagram. Later, a primitive surgery on kidney stones complete with fecal flow and vivid imagery. No illustration this time. And always when I was eating while I read. It’s just bizarre to toss these hyper-real scenes into the story when ultimately they had no impact whatsoever on the plot.

The Thousand Autumns is complete with extremely clever writing and quite a lot of humor. I read on another blog that once again competent women can’t save themselves and have to rely on a man to save them, but I think this is unfair to Orito who up at the totally evil nun sanctuary handled herself quite well.

I’m not feeling like this is a good review and for that I apologize, I can’t seem to figure out how best to explain it. I was interested and engaged most of the time, but left feeling ambiguous. Overall I found no real theme or plot to this book, mostly just a good story- but it isn’t going to leave you with a sense of accomplishment or satisfaction either.

I was born and raised out on the fringes of the rainy Pacific Northwest on fishing boats and cold beaches with only a dog and kittens for company, and so my love of reading and creating stories started very early. My dad would illustrate my early stories and I would listen to him ramble about European history and warfare, eagerly asking questions about Kings, Queens and our own family history. In my adult life I am wife to a brilliant and hilarious web designer and mother to two wonderfully weird children whom I am trying to pass on to my love of learning about the world. I'm an amateur genealogist, amateur photographer and amateur history major haha. I'm good at doing amateur stuff lol. During the last couple years I finally turned my life-long urge to write into a serious endeavor and finished my first novel called (for now) The Stone and the Stars, about a dying dystopian society, and one girl trying to escape it before it collapses. While I finish cleaning up the edges on my novel for the umpteenth time, and before I send it out into the world, I've lately begun a novel about utopia, this time on Earth. I'm finally living up to the nerdy book-worm title my family 'lovingly' pinned on me from the time I was small, and finally doing that one thing I feel like I was born to do. Cliche and silly? Yes!
View all posts by Deanne →
Tagged  18th century, David Mitchell, Dutch, Fiction, Japan, Netherlands, The Thousand Autumns of Jacob de Zoet, trading.
Bookmark the permalink.