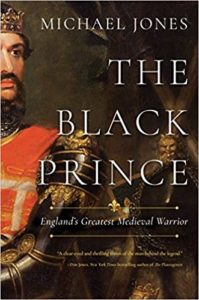 The Black Prince: he sounds like a super-villain guilty of oppression and vile deeds; or a shadowy figure of mystery lost in the mists of time; but in this case he was the very opposite of those things. What kind of man could earn a moniker as awesome as that and have it stick for hundreds of years? Edward III of England’s firstborn son also named Edward, that’s who.

When reading the medieval history of England and Europe, it takes a long time to get down to the so-called smaller characters, the ones who were there and then gone, the ones who should have or might have been king if things had gone differently.

I knew who the Black Prince was in theory, knew nothing about him in practicality. This book was really amazing in the detail it imparted while keeping the reader bouyant in the ocean of information and events. THAT is an accomplishment.

Michael Jones would make a great history teacher if he hasn’t been one before, or a lecturer or something awful like that. Jones discusses facts and wields sources and a bibliography with the best of them, but doesn’t write with dry packed sentences one after the other like unbuttered toast stacks or something. (I’m hungry)

Jones neatly tells the tale of the Black Prince’s place in the world with enough information surrounding his birth for you to understand but not so much to overwhelm, that is to say his birth was: after (his grand-mother) Isabella the She-Wolf of France tossed her husband the king off the throne and took over with her lover Mortimer until her son Edward the III (his father) grew up and had sons, first of which was Edward himself who came in posterity to be known as the Black Prince; and before John of Gaunt (his younger brother)’s illegitimate son Henry grew up and usurped the throne from his cousin Richard II (his only surviving son) kicking off the Wars of the Roses – Lancaster vs. York. 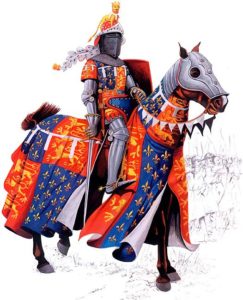 The full war regalia of Edward Plantagenet, the Black Prince

If that spun your head I’m sorry, the author does it better and obviously in much nicer detail. The Black Prince was more than a one in a lifetime type man, he was one of a kind for an entire age: The age of chivalry which was the code of conduct that men and knights lived and died by.
It was a heady mix of serious religion and serious warfare, and the specific rules by which each was governed. The men of that time understood each other, disdaining people who switched sides, harassed women unduly, didn’t pay their men, and couldn’t choose right over wrong in a given situation. 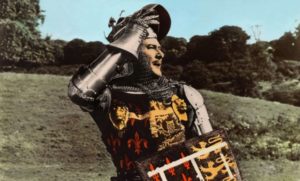 Edward, the Black Prince grew up in warfare. His father Edward III was a mighty king in his prime, the nation of England was touted as the glory of the seas, or something to that effect. The English successfully captured and held more lands in France than if I’m not mistaken, and time after that or before except perhaps in the time of Henry II two hundred years before.

The English held lands in Anjou, Aquitane, Toulouse, and Edward III waged war successfully at this time partly due to the exceeding military prowess of at least two of his sons, Edward and John.

The Black Prince was sixteen years old at the famous battle of Crecy where he ‘won his spurs’ proving his courage to the extreme in battle.
His father the king did not come for him when there were reports of trouble engulfing his son, he replied, “Go back to him and those who sent you and tell them, from me, that they are not to send for help again, whatever happens, as long as my son is still alive. Tell them that my orders are that they should let the boy win his spurs, for I wish the day to be his, if God wills it, and that he and his companions shall have the honour of it.”

Wow. In reality the king did dive in when the fighting became so fierce that Edward had been knocked off his horse and suffered a concussion, but Edward recovered and carried on fighting. The companions that won that day alongside the prince in many cases became his closest friends for the rest of his life. 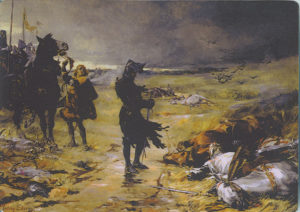 The Black Prince at the battle of Crecy

Edward was given the principality of Aquitane due to his outstanding successes in melding the Anglo-Gascon army – something I’m not sure was done so well at any other time – and rampaging all around France with said army, burning the lands of those who would not submit to the role of Edward as Lord of Aquitane, and amassing much wealth in the process.

Unfortunately due to Edward’s lifestyle living large as he did, both a very generous lord and a guy who liked to live in style, his finances were higher than the income of the lands. Edward was more than once described as such a noble man that though many riches were his he made himself poor by his generosity. Of course much of the generosity was expected of the time as a way to pay back loyalty, earn favors and future allies.

Edward was forced to tax the inhabitants, but interestingly he did it in full consent and in participation with the people of the place. It was really no different than the taxes we pay today that the government then uses towards its infrastructure, its trade and obviously its military expenditures.

This may have been well ahead of its time and was definitely lost on the people. Taxes were a base cause of all kinds of trouble in Europe through the ages, and as Edward’s tax grew harder to enforce (his health was suddenly declining at this time), more people kept slipping away to the French king who was wiggling his fingers in glee and declaring he’d never request something so silly as the sort of tax Edward required.

Maddingly, Edward III dithered a bunch instead of backing up his son, sending armies to the wrong parts of France with vague instructions instead of to the lands his son needed to strengthen his position. More lords and lands slipped away from Edward’s helpless grasp, eventually to the loss of Aquitane and a severe breach of trust between father and son. Edward as mentioned was struck by a mysterious wasting illness that left him bed-ridden and full of sadness and depression as he approached and entered his 40s.

Eventually he was no longer able to remain as lord and prince of Aquitane and surrendered the lands to his father, in effect, ‘here you take it back and see how to pay for them’ and returned home to England a beaten and wasted man. At this point it seems his entire life’s work and struggle were for naught.

Edward Plantagenet, the Black Prince died in June of 1376 at the age of 46. A chronicler wrote, “Never, so God help me, was there such sore pain beheld as at his departing. The lovely and noble Princess felt such grief that on’es heart was nigh breaking. The lamentation and sorrowing would have touched any man of this world.” I found it so touching that for once it was recorded how much his wife grieved where usually we are left to guess at the feelings of those long dead. In the case of a man dead over six hundred years; a clear picture remains of Edward the man and how others felt about him.

Too the words on his tomb are sobering: ‘As thou art, once the world saw me; as I am, so thou in time shall be.’ 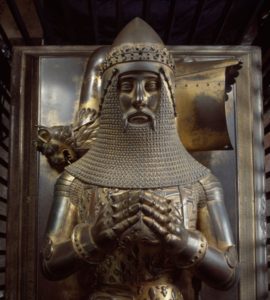 Effigy of the Black Prince in Canterbury Cathedral

The author poignantly captures the last days of Edward when he sums up his life like this: “At six years old he had been created the first duke in English history; at sixteen he had won fame by his bravery at Crecy; at twenty-six he had astounded Europe by capturing King John of France at Poitiers; at thirty-six he had sealed his supremacy as a military leader with the victory at Najera.” Now the worldly glory was gone.

The Black Prince was an interesting and moving historical biography, necessarily focusing on many martial aspects of day-to-day life in the fourteenth century but always moving forward through the prince’s life and using many many quotes from different sources to give us as clear a view as possible of the prince’s life and personality. Much more is described by FAR than I’ve included in this short review, it was really interesting to discover that this prince could have been one of England’s most famous kings and much rarer yet- he was a good man not just a good fighter. He was rare to his age and rare to humanity in his piety his genuine goodness and concern for fairness and doing what was right.
It seems one of those tragedies of history that we never got to see Edward as king, his father Edward the III died just the year after the prince did. All of history could have been different of course, but there’s a reason the Black Prince is remembered well so down through the ages.

I personally picked the book up day to day and read about a chapter or two at a time otherwise I’d probably have retained nothing. As it is, I feel like I have a clear picture in my head now of Edward Plantagenet the Black Prince, not just a suggestion of a man who once was yet still continues to be great.

I was born and raised out on the fringes of the rainy Pacific Northwest on fishing boats and cold beaches with only a dog and kittens for company, and so my love of reading and creating stories started very early. My dad would illustrate my early stories and I would listen to him ramble about European history and warfare, eagerly asking questions about Kings, Queens and our own family history. In my adult life I am wife to a brilliant and hilarious web designer and mother to two wonderfully weird children whom I am trying to pass on to my love of learning about the world. I'm an amateur genealogist, amateur photographer and amateur history major haha. I'm good at doing amateur stuff lol. During the last couple years I finally turned my life-long urge to write into a serious endeavor and finished my first novel called (for now) The Stone and the Stars, about a dying dystopian society, and one girl trying to escape it before it collapses. While I finish cleaning up the edges on my novel for the umpteenth time, and before I send it out into the world, I've lately begun a novel about utopia, this time on Earth. I'm finally living up to the nerdy book-worm title my family 'lovingly' pinned on me from the time I was small, and finally doing that one thing I feel like I was born to do. Cliche and silly? Yes!
View all posts by Deanne →
Tagged  Anjou, Aquitane, biography, Charles IV, Edward III, France, historical non-fiction, History, John of Gaunt, medieval war, Pedro of Castille, Poiters, The Black Prince, The Black Prince: England's Greatest Medieval Warrior.
Bookmark the permalink.