The Light Between Oceans: by M.L. Stedman 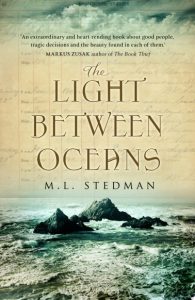 After WWI a lightkeeper named Tom falls for and marries a lovely full-of-life young woman named Isabel. Together they set out on the new adventure together of life and love on the tiny island the lighthouse is situated on. Sadly though their life is marred by one miscarriage after another, seeping the light and joy out of Isabel. Three weeks after her third miscarriage, the sea in all its mystery and wonder, delivers up to their island a seeming gift from God: a very young infant in a rowboat with a dead man.

Tom is as upright of a man as it gets. A lightkeeper must keep the minutes of the sea and report even the smallest minutiae of life in the record books. He is also loyal to a fault, but that loyalty is now split between what he knows is right (and lawful) and to his wife when she insists they keep the baby and pretend that the last miscarriage never happened.

Isabel either doesn’t realize that this goes deeply against Tom’s nature, or is too absorbed in her grief and the yearning of her body for a child- she bonds with the baby immediately, to consider the possible ramifications of asking her husband to do this thing for her.

No one though can foresee the trajectory that keeping the child takes, and the heartbreak involved. As a parent myself I found a real physical ache in my chest often while reading. A real unanswerable dilemma is posed where there can be no easy answer. It really goes to show that our choices may be like a tiny stone dropped into a still pond, the ripples are much larger than we can know.

I was entirely unsatisfied with the ending, but at the same time the right thing was done. I personally dislike reading these kinds of books because at the end of it, you aren’t left with any good emotion. It’s like: here is this tragic tale, a peep into the lives of someone who came before, and that’s the end! Many others do enjoy these journeys though, and the writing is poetic and simple at the same time which I appreciated. I guess I wish there had been a little better closure at the end, rather than ‘reality bites’.

‘The Light Between Oceans’ is a tragic sort of love story about more than one kind of love, and a bit of a cautionary tale as well. If you are the kind of person who likes to cry during movies, go for this book! And then see the movie too I suppose which looks beautifully acted and beautifully shot 😉

I was born and raised out on the fringes of the rainy Pacific Northwest on fishing boats and cold beaches with only a dog and kittens for company, and so my love of reading and creating stories started very early. My dad would illustrate my early stories and I would listen to him ramble about European history and warfare, eagerly asking questions about Kings, Queens and our own family history. In my adult life I am wife to a brilliant and hilarious web designer and mother to two wonderfully weird children whom I am trying to pass on to my love of learning about the world. I'm an amateur genealogist, amateur photographer and amateur history major haha. I'm good at doing amateur stuff lol. During the last couple years I finally turned my life-long urge to write into a serious endeavor and finished my first novel called (for now) The Stone and the Stars, about a dying dystopian society, and one girl trying to escape it before it collapses. While I finish cleaning up the edges on my novel for the umpteenth time, and before I send it out into the world, I've lately begun a novel about utopia, this time on Earth. I'm finally living up to the nerdy book-worm title my family 'lovingly' pinned on me from the time I was small, and finally doing that one thing I feel like I was born to do. Cliche and silly? Yes!
View all posts by Deanne →
Tagged  Australia, Fiction, lighthouse, lightkeeper, loss, love, M.L. Stedman, Romance, The Light Between Oceans.
Bookmark the permalink.