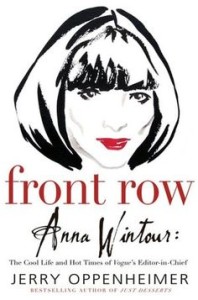 Nearly 400 pages of scandal, intrigue and cat-fights! Well not quite. After watching The September Issue documentary which went behind the scenes of Vogue magazine for its biggest annual issue, I found myself in the mood to read fashion biographies and memoirs. Turns out those are few and far between and I read something tragically boring about Gloria Vanderbilt: Queen of really icky design themes; but I found just what I was looking for initially in Oppenheimer’s exhaustive biography of Anna Wintour, renowned Ice Queen and reputed baby-eater.

Anna’s personality is famously cold, glacial, icy, whatever. Remember ‘The Devil Wears Prada’? That was a great book by the way. Oppenheimer out-did himself in tracking down information about Anna’s past, her family, and her rise to the top of the world’s biggest fashion magazine. 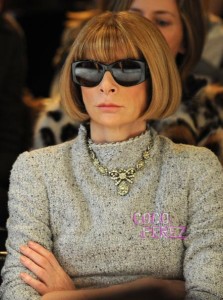 She had diced kittens for breakfast

It was interesting reading about her home life, it was unusual in the way that her parents seemed to have little to no rules. Anna had her own flat to come and go as she pleased at 15 years old in 1963, she quit school over a disagreement about her miniskirts, and by her mid-teens was in the world of dating and club-hopping. Anna was filled with energy, always wearing miniskirts, always dancing.

A glimpse into the making of her character might be revealed when you learn her brother was killed in an unfortunate accident at a young age. It seemed to break her parents completely. Her mother was nervous, always feeling she would lose another child, her father turned even more glacial and removed from the entire family. I’m imagining a lonely life with plenty of money, but very little love. Perhaps this explains the long affair-filled love life? Anna without her shades!

The author must have interviewed every last person who’d ever even met Anna, and as a result, the picture is pretty complete. Her rise through the magazine editing world and her dust-ups with others who worked alongside her is interesting reading. One thing I didn’t appreciate as much is the constant insertion of character intent. No one knows Anna except Anna herself. You can’t take a situation and say she felt this or that, which Oppenheimer constantly does. He talks about her as a caricature, the one everyone loves to be in awe of or hate, while simultaneously laying out all this information that makes a decently complete picture.

As a biographer, this is correct, the imparting of motive to her is not. Oppenheimer consistently says Anna said something ‘bitchily’ not stopping to consider this makes him sound pretty ‘bitchy’ too. On the whole as someone interested in fashion, and more-so how the editing and advertising world works, it’s a pretty good read. TOTAL beach book.

I came away feeling more sympathy for Anna and her cold persona than otherwise and I’ll give you one tidbit example: it is constantly pointed out, nearly monthly on social media and in articles how Anna wears those giant dark sunglasses even inside! Oppenheimer learned that they are very strong prescription sunglasses and she’s nearly as blind as a bat without them, and she’s an incredibly self-conscious person. Later,  upon reading a book by Grace Coddington which I will review later, I got a much better sense of Anna’s humor and loyalty.

I’m sure Anna Wintour is just about the toughest person on the planet to work for. I’m sure she isn’t friendly often, and she’s surely demanding and a perfectionist. I’m also sure though, that from time to time the Ice Queen does thaw.

I was born and raised out on the fringes of the rainy Pacific Northwest on fishing boats and cold beaches with only a dog and kittens for company, and so my love of reading and creating stories started very early. My dad would illustrate my early stories and I would listen to him ramble about European history and warfare, eagerly asking questions about Kings, Queens and our own family history. In my adult life I am wife to a brilliant and hilarious web designer and mother to two wonderfully weird children whom I am trying to pass on to my love of learning about the world. I'm an amateur genealogist, amateur photographer and amateur history major haha. I'm good at doing amateur stuff lol. During the last couple years I finally turned my life-long urge to write into a serious endeavor and finished my first novel called (for now) The Stone and the Stars, about a dying dystopian society, and one girl trying to escape it before it collapses. While I finish cleaning up the edges on my novel for the umpteenth time, and before I send it out into the world, I've lately begun a novel about utopia, this time on Earth. I'm finally living up to the nerdy book-worm title my family 'lovingly' pinned on me from the time I was small, and finally doing that one thing I feel like I was born to do. Cliche and silly? Yes!
View all posts by Deanne →
Tagged  Anna Wintour, Jerry Oppenheimer, The Front Row, The September Issue, Vogue.
Bookmark the permalink.