The Lies of Locke Lamora: by Scott Lynch 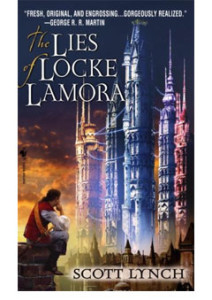 ‘The Lies of Locke Lamora’ is a tough call for me. I’d read so many great reviews about it, and it’s such a favorite with people that I had to read it. There was great stuff, there was saturating stuff, there was bad stuff. I think this is Scott Lynch’s first book correct me if I’m wrong, but I felt that lack of expertise time and again throughout the writing. Thick over-worked world-building details and confusing scenery mix with witty banter and an immediate interest in the main character. Dirty, foul-mouthed characters and over-the-top graphic fight scenes contrast against over-all well-done storytelling.

You learn the story through a leap-frog back and forth from past to present. I usually hate this, but it is spaced so brilliantly, that when the next scene takes you to the past, it’s all the more delicious to learn how Locke came about that particular skill, or how he and his Gentleman Bastards were taught their trade. The Gentlemen Bastards are thieves in a particularly violent world led by guilds and masters and thugs, lorded over by the ultra rich way off in their inhuman-built towers. That point doesn’t even matter but it’s brought up like fifty times. The towers are so other-worldly!

This is a pretty cool visual of the city of Camorr, dirty thing that it is

By the time Locke and his friends stumble into the gambit that risks their lives more-so than regular and discover a plot that threatens everyone (of course) and it becomes seriously personal for the gang; the reader is along for the ride and there’s no getting off this train. It’s not a scholarly piece, and it’s filled with crass language and the F word which drives me crazy, especially in fantasy or science-fiction. There was like, one place where it was funny, the rest is you know, indicative of the moral decay of society yada yada. I didn’t like it, I’m puritanical remember.

The whole thing climaxes in a giant shebang with literal fireworks, duels, death, swords and sneakery. It’s a rolling good time, as a movie-poster might say, funny and witty and filled with main characters getting their butts seriously handed to them; but tinged with distaste as well. Read at your own caution.

I was born and raised out on the fringes of the rainy Pacific Northwest on fishing boats and cold beaches with only a dog and kittens for company, and so my love of reading and creating stories started very early. My dad would illustrate my early stories and I would listen to him ramble about European history and warfare, eagerly asking questions about Kings, Queens and our own family history. In my adult life I am wife to a brilliant and hilarious web designer and mother to two wonderfully weird children whom I am trying to pass on to my love of learning about the world. I'm an amateur genealogist, amateur photographer and amateur history major haha. I'm good at doing amateur stuff lol. During the last couple years I finally turned my life-long urge to write into a serious endeavor and finished my first novel called (for now) The Stone and the Stars, about a dying dystopian society, and one girl trying to escape it before it collapses. While I finish cleaning up the edges on my novel for the umpteenth time, and before I send it out into the world, I've lately begun a novel about utopia, this time on Earth. I'm finally living up to the nerdy book-worm title my family 'lovingly' pinned on me from the time I was small, and finally doing that one thing I feel like I was born to do. Cliche and silly? Yes!
View all posts by Deanne →
Tagged  fantasy, Scott Lynch, The Lies of Locke Lamora.
Bookmark the permalink.