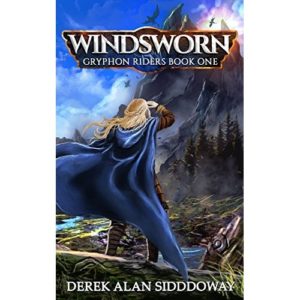 ‘Windsworn’, the first book in a new YA trilogy features a young woman named Evelyn who has been thrust from total obscurity and happy boredom living in a village smithery – to a life of militant schooling in the mountain fortress of Gyr, trained to join the ranks of Windsworn: the elite riders of Gryphons (beasts of myth, look them up) who serve the King and protect the kingdom of Altaris. I realize that’s quite a sentence but I read it over a few times and I feel good about it.

YA can be a difficult genre – needing to appeal to younger readers and adults alike, straddling a fine line between teenage conversations and crushes; and the depth of description and emotions that set the novel above just a book for kids. ‘Windsworn’ does an admirable job of striking the right balance, although it doesn’t perform 100% in all categories. When I sat down to write this review I checked out the author’s bio on Goodreads and saw that he’s only 23. Twenty-three!! I’d looked at his personal website beforehand but missed how young he was. It only altered my perception of the book in his favor, as I would have loved to have been writing so well at that age.

So, the good: I was happily drawn in right away to a simple introduction, no long out descriptions of Altaris’ history and a bunch of names right off the bat I’m never going to keep straight (I hate that), no long-winded descriptions of mystic mountains and rippling streams where lonely winds howl (I’m totally guilty of the tendency to stray this way). Evelyn (called Eva)’s life is simply understood: she’s an orphan, so she understands, who lives and works at the village forge with a kind-hearted smith (who holds the secrets to her origins) and a stone golem; when one night she and the golem interrupt a thief in the chicken yard. Not just any thief, the boy has stolen the most important egg in the nearby mountain fortress that houses the riders, gryphons and their eggs. This particular egg is red which is rare and portends momentous events; and the boy has brought it to Eva, and he wont’ leave, and he is insisting she keep it. Before Eva can figure out what to do the egg has hatched and the gryphon chick has imprinted on her. She’s immediately swept off to become a rider at the Gyr which is fraught with difficulty for Eva, not least because she’s years past the age when new recruits are normally taken in. Basically her whole life is now upside down but it’s not all bad, in fact it’s new and interesting plus there’s a very good looking rider if she could ever get to know him.

The mystery of why the red egg and its inhabitant was stolen in the first place, why it was brought to Eva, who she really is (we sort of know but she doesn’t) and what the momentous events that seem to have been set into motion the very night the egg was taken make up the bulk of the story. As such ‘Windswept’ is adventurous and fun, frequently funny and is quick-paced.

I always enjoy the main components of stories like these: the orphan or semi-orphan of unknown origins; the bonding with an unusual element that’s unruly like a dragon or a gryphon in this case; and the challenge of unusual schooling, all as written before in different styles in books like the Harry Potter novels, ‘The Name of the Wind’ by Patrick Rothfuss, and ‘Eragon’.

The weaknesses in ‘Windsworn’ for me lay mostly in dialogue. I realize the main characters were teens, but even the adults had stunted sentences, and during the most high-octane moments of the novel the conversation tended to sound a little cheesy to me rather than a natural flow of words. I haven’t read YA in so long I did wonder if this was just me though, so I’m buying a kindle copy and setting my 12 year old daughter to read it next to see what she thinks.

I was also disappointed that there wasn’t more interaction between Eva and her gryphon chick because I really enjoyed what I did read, and I could have probably read much more. Eva was prone to histronics (again, teenager) and to me way too many descriptions of ‘stomach swooping’, ‘head spinning’, gut-wrenching, tears welling, type moments.

SEMI-SPOILER ALERT: I also wasn’t quite clear on the actual threat to the Gyr, which was a big problem because the entire point of the end of the book was a complex underground Indiana Jones-esque, Oblivion/Skyrim booby-trapped stone maze leading to the conclusion. The very detailed descriptions of said booby-trapped stone maze was more elaborate than necessary to me, and I really wasn’t emotionally connected or worried about the characters at this point possibly because of the abrupt rush into danger, with no foreshadowing really of what the threat was that they were facing.

Overall I found myself thinking of the story when I wasn’t reading it, and looked forward to reading more, which is the ultimate goal of authors and readers alike. So while there were some finer points of skill lacking in the novel, the age alone of the author can only mean (I hope) that the books will continue to grow in depth and real emotional impact. I remember even J.K. Rowling had that aha! moment in book 3 where you could almost physically see her craft growing. I’m now getting into book 2 of the Gryphon Rider Trilogy, so stay tuned, and as always I hope readers excuse my long-winded semi-accurate punctuation style and run-on sentences!

I was born and raised out on the fringes of the rainy Pacific Northwest on fishing boats and cold beaches with only a dog and kittens for company, and so my love of reading and creating stories started very early. My dad would illustrate my early stories and I would listen to him ramble about European history and warfare, eagerly asking questions about Kings, Queens and our own family history. In my adult life I am wife to a brilliant and hilarious web designer and mother to two wonderfully weird children whom I am trying to pass on to my love of learning about the world. I'm an amateur genealogist, amateur photographer and amateur history major haha. I'm good at doing amateur stuff lol. During the last couple years I finally turned my life-long urge to write into a serious endeavor and finished my first novel called (for now) The Stone and the Stars, about a dying dystopian society, and one girl trying to escape it before it collapses. While I finish cleaning up the edges on my novel for the umpteenth time, and before I send it out into the world, I've lately begun a novel about utopia, this time on Earth. I'm finally living up to the nerdy book-worm title my family 'lovingly' pinned on me from the time I was small, and finally doing that one thing I feel like I was born to do. Cliche and silly? Yes!
View all posts by Deanne →
Tagged  Derek Alan Siddoway, fantasy, Fiction, Gryphon, Gryphon Rider Trilogy, Windsworn, YA, young adult.
Bookmark the permalink.