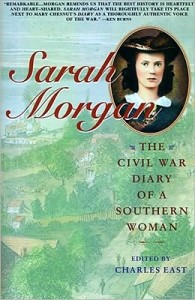 I’m sorry to report I can’t make it any further in this book presently because it’s draining my spirit. I’m only half-kidding. I ran out of batteries finally on page 208 out of 612 (!!) The problem here is that the diary was already published ages ago, edited by her son for brevity and clarity, and this author felt cheated by that and spent what must have been an utterly exhaustive amount of time copying, by hand! the diary from microfilm and making extensive notes which we are all subjected to throughout the course of reading. I don’t blame him, he really did a whopper on himself here.

The idea of reading a diary written in real-time as the Union troops battered down the Confederate cities one by one from the vantage point of a twenty year old Southern belle sounds great, it still sounds great and it’s come to my attention that a few other women wrote accounts also, and those sound better! Sarah Morgan is a member of the ‘Proud Morgan’ family, and boy is she ever proud of it. You can’t fault her, she is the product of her time period and in fact I think she was really remarkable in her boldness, sassy personality, and her eventual involvement in what could be called early women’s rights. Sarah did not think the end-all-be-all of a woman’s existence should be the hunt for a husband (yay her) but that is partially because she was so sure it would be tough for a man to earn her respect because her own heart was worthy of a lion (channeling Elizabeth I?) and we hear Sarah moan endlessly ‘if only I were a man!’

Sarah despises her fellow females, despises nearly all men, and is particularly spoiled and snobby. She was a girl of apparent courage, more than once she enticed her friends to ride out in the middle of the night to see the battles! and a person who kept her head in the midst of repeated actual shelling of her town in Louisiana, keeping up the spirits of her overly-hysterical mother all the while. Sarah and her family lost nearly everything in the war, nearly everything material, but sadly also her father and several brothers died. Sarah early on displayed great forbearance in realizing that material things do not matter in the big picture.

The problem here is the extended ramblings of a girl who is twenty going on fourteen laid out word for word over several years worth of diaries. The reader does not need the frequently boring or snobbish musings, or her pages of random speculations of the war. An annoying trait of Sarah’s is to state vehemently that if she were a man she would fight, she is a rebel at heart, the other women are weak, she views herself as very logical- but she absolutely detests women who ‘meddle’ in politics, that is, talk about it, when that’s obviously half of what her diary is about. Sarah holds herself on the highest moral pedestal possible and the creatures that crawl about beneath her do coarse things like talk about the war in front of men!

The other major issue with this book is the authors before mentioned habit of inserting boring and totally unnecessary footnotes a zillion times per page, and inserting numbers into the actual text to tell us what page of Sarah’s diary this was, as if that possibly matters. The footnotes read like, ‘Dr. A. V. Woods was a physician, age 27 and unmarried in the 1860 census. Dr. Peter M. Enders lived in the same block with the Morgans.’ the one time Sarah says she saw Dr. Woods or, ‘Sarah is referring to the clock on the bank of William S. Pike. The Baton Rouge Branch of the Louisiana State Bank was on Third Street, one block west of Church Street.’ When she says the time! That doesn’t sound bad if it were need to know information, but except for the early hints on who the family is, it never is. It frequently tears you out of the reading and serves to keep the diary as a reminder that hey, this editor guy knows a lot about the Civil War!

I would love to see the life of Sarah Morgan treated by a professional author of historical non-fiction, where you can learn about her life and the undeniably exciting, sad, or dangerous events she lived through (she even witnessed a battle between ironclad warships where one caught on fire and sunk), while getting a glimpse of the era and the war. Treated like this, it is simply tedious.

I was born and raised out on the fringes of the rainy Pacific Northwest on fishing boats and cold beaches with only a dog and kittens for company, and so my love of reading and creating stories started very early. My dad would illustrate my early stories and I would listen to him ramble about European history and warfare, eagerly asking questions about Kings, Queens and our own family history. In my adult life I am wife to a brilliant and hilarious web designer and mother to two wonderfully weird children whom I am trying to pass on to my love of learning about the world. I'm an amateur genealogist, amateur photographer and amateur history major haha. I'm good at doing amateur stuff lol. During the last couple years I finally turned my life-long urge to write into a serious endeavor and finished my first novel called (for now) The Stone and the Stars, about a dying dystopian society, and one girl trying to escape it before it collapses. While I finish cleaning up the edges on my novel for the umpteenth time, and before I send it out into the world, I've lately begun a novel about utopia, this time on Earth. I'm finally living up to the nerdy book-worm title my family 'lovingly' pinned on me from the time I was small, and finally doing that one thing I feel like I was born to do. Cliche and silly? Yes!
View all posts by Deanne →
Tagged  Civil War, Confederate, Louisiana, Sarah Morgan, Union.
Bookmark the permalink.