A Morbid Taste For Bones: by Ellis Peters 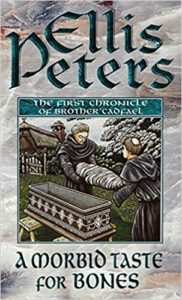 It’s been years, and I mean YEARS since I read a mystery for reasons too lengthy to post here but here’s insight into part of the problem.
I found this book thanks to my handy dandy kindle store recommendations, thanks guys! Haha, but really they do know me. Medieval? Yes. Monks and murder? Okay. $1.99 and instant gratification? You guys got me. (Note: the next book or three is five times the price and I deeply resent this type of mark-up).

‘A Morbid Taste for Bones’ takes place in Ye Olde England, like reallllly oldeee England – around the time King Stephan and Matilda were trouncing around the place fighting their cousins’ war/the time when ‘Christ and his saints slept’ aka the 12th century, the beginning of the march of Franco-English kings and queenes of the Angevin dynasty. But I digress and I hope you’re still reading! Cadfael is a Welsh monk in Shrewsbury Abbey in western England: a man of rich and storied past that’s only hinted at; serving his middle years out in domestic gardening bliss.

The Abbey is a soothing place, cleansing for the soul and varied enough by the individual personalities of the monks to keep life interesting for Cadfael. Still, he’s only half-interested in the plot brewed up by the ambitious sub-pryor to get themselves a saint of their own for the Abbey. Saints brought prestige to abbeys in the middle ages, and more importantly, patrons and customers – ahem – supplicants and pilgrims – bringing money to pray/be cured/absolved etc. by the relics of said saint.

The saint picked out for future glory is a little Welsh virgin by the name of Winifred who interestingly enough was a real woman. Saint Winifred was a 7th century Welsh Christian who was lusted after by a local prince. Frustrated by her refusal and flight, the suitor understandably removed her head from her body. Her head was re-attached to her body by her uncle, another Welsh saint, and Winifred returned to life and spent the rest of her life as a nun and an abbess at Gwytherin in Denbigshire, Wales. Here is more interesting information about the real Winifred.

What would a nice little saint like that want with being transferred to England? Well Cadfael goes along for the journey as much out of curiosity as for his usefulness in being a Welsh native and his desire to see his native people done right by. Obviously the Welsh are hospitable, but don’t want to part with their saint, who is by the way, revered in a way very different from the English way. Winifred sleeps soundly in her unmarked grave, untended and ostensibly at peace with her people who she spent her lifetime amongst. 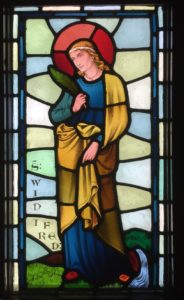 Are the visions of the wildly dramatic monk (from Shrewsbury) claiming Winifred wants greater glory authentic? How far would a man be willing to go for personal prestige, for glory, or for love? This story neatly combines those elements, all of which are known to cause murder (ha.) and do, in this case.

I found the story easy to read and fairly simplistic. The writing itself had a nice cadence and had a few pieces of dropped wisdom that was nicely done. The murder and the clues were fairly boring to me, I wasn’t interested much in who did it, although the character sketches were good enough to keep interest, the real star of the story is Cadfael; who is clever, good-hearted and has a nice appreciation for doing the right thing by all. But is there something more than he expected to be gained spiritually from the adventure? That’s a nice touch too and the whole plot is well done.

When I learned it was made into a show and this book is an episode, I thought that very apropos to the nature of the book. 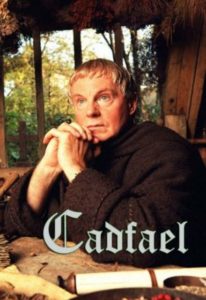 I see this guy, I think of squirrelly dudes from the show Rome

More episodic than a novel in itself; still, a story that was nice for being fully fleshed out in detail. I’d recommend this for light reading, for lunch time thoughts. No steak or heavy casserole this. (Nod to my first reviews when I unaccountably kept comparing everything to a drink until my husband cast doubt on my whimsy). But seriously I might watch have to watch this show.

I was born and raised out on the fringes of the rainy Pacific Northwest on fishing boats and cold beaches with only a dog and kittens for company, and so my love of reading and creating stories started very early. My dad would illustrate my early stories and I would listen to him ramble about European history and warfare, eagerly asking questions about Kings, Queens and our own family history. In my adult life I am wife to a brilliant and hilarious web designer and mother to two wonderfully weird children whom I am trying to pass on to my love of learning about the world. I'm an amateur genealogist, amateur photographer and amateur history major haha. I'm good at doing amateur stuff lol. During the last couple years I finally turned my life-long urge to write into a serious endeavor and finished my first novel called (for now) The Stone and the Stars, about a dying dystopian society, and one girl trying to escape it before it collapses. While I finish cleaning up the edges on my novel for the umpteenth time, and before I send it out into the world, I've lately begun a novel about utopia, this time on Earth. I'm finally living up to the nerdy book-worm title my family 'lovingly' pinned on me from the time I was small, and finally doing that one thing I feel like I was born to do. Cliche and silly? Yes!
View all posts by Deanne →
Tagged  A Morbid Taste For Bones, Ellis Peters, Fiction, Historical Fiction, mystery.
Bookmark the permalink.