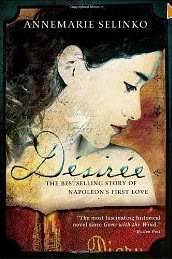 I was excited to learn about Desiree, Napoleon’s first love as he described her himself in his memoirs. Do his memoirs actually exist? I haven’t checked. (Pffft). Like many fictional historical novels it was a bit disappointing to wonder how much was real and how much imagination. I had to refer to Wikipedia a lot, and I wanted to just enjoy the book. So I only peeked three times.
Eugenie Desiree Clary began as a silk merchant’s daughter in the southern French city of Marseilles near the end of the 18th century, and became a Crown Princess, then a Queen in her own right who started a new dynasty in Scandinavia.

A simple sweet girl entranced General Napoleon Bonaparte when he was a young man full of fiery ideas who could hardly afford a decent uniform. Desiree knew him before his meteoric rise to first Emperor of the French, and the terror of much of Europe. Unfortunately for her, or perhaps luckily, Napoleon needed money and position in society more than he did love, but he never forgot Desiree. As it happens, Desiree’s sister Julie married Joseph Bonaparte, Napoleon’s older brother and became a Queen as well. Although never married to Napoleon, Desiree’s story remains intertwined with his until his bitter end in exile. Meant to be a love story it lacks in emotion during the most emotional parts. I did very much enjoy Desiree’s basic character and outspoken personality. Unlike many many historical figures who have risen to power and position from the middle class, she never seems to have forgotten her roots. More happy in a cottage than a palace, with her family than servants, Desiree was nonetheless placed in history’s path. Her eventual husband, whom she meets in a fictional but very romantic setting, became a hero of the French army and was invited by the people to become King of Sweden and Norway.

Desiree hated castles, pomp and circumstance, and therefore lived as much away from courts as she could despite having many royal family members. I was happy for her successes and interested in many of the famous people she was fated to meet including Josephine- Napoleon’s wife, and the members of Napoleon’s family although they are described sparingly and in a greedy, grasping light. Eventually she spent 12 years away from her husband and only son who moved to Sweden because of her love for Paris and dislike of the cold Northern court. This was hard for me to swallow since she did this purely out of personal preference, and though making an attempt to describe how hard it was for her to leave the husband and son she is so attached to, the author never totally wins you over to Desiree’s point of view. She seems to spend much of her life wishing to be with her family, yet voluntarily leaves them.

The many separations from her family, shocking and terrifying personal moments during Napoleon’s reign and the frightening days during his overthrow all sound extremely exciting, but somehow lack the connectivity a really good author can convey. Even while describing tender moments of reunion or separation with her family or husband, it feels very underwhelming. I think anyone curious about a glimpse into Napoleon’s character and family before he was famous, and who likes a love story that keeps evolving at a decent pace would enjoy this book. It’s well written with lively conversation and characters, and you may even like me be motivated to learn more about the other historical people you meet, but in the end for being in such a unique position, ‘Desiree’ is sadly forgettable.

I was born and raised out on the fringes of the rainy Pacific Northwest on fishing boats and cold beaches with only a dog and kittens for company, and so my love of reading and creating stories started very early. My dad would illustrate my early stories and I would listen to him ramble about European history and warfare, eagerly asking questions about Kings, Queens and our own family history. In my adult life I am wife to a brilliant and hilarious web designer and mother to two wonderfully weird children whom I am trying to pass on to my love of learning about the world. I'm an amateur genealogist, amateur photographer and amateur history major haha. I'm good at doing amateur stuff lol. During the last couple years I finally turned my life-long urge to write into a serious endeavor and finished my first novel called (for now) The Stone and the Stars, about a dying dystopian society, and one girl trying to escape it before it collapses. While I finish cleaning up the edges on my novel for the umpteenth time, and before I send it out into the world, I've lately begun a novel about utopia, this time on Earth. I'm finally living up to the nerdy book-worm title my family 'lovingly' pinned on me from the time I was small, and finally doing that one thing I feel like I was born to do. Cliche and silly? Yes!
View all posts by Deanne →
Tagged  Bonaparte, Desiree, France, French Revolution, Napoleon, Sweden.
Bookmark the permalink.