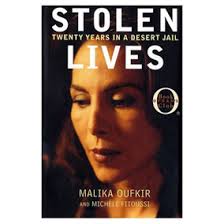 April 22nd 1987 while the rest of the world was going about its business, four siblings stumbled through the streets of Tangier, Morrocco looking for anyone, anyone at all to help them. Barefoot and starving they searched everywhere for succor. Strangers, former friends, even relatives turned them away. They had just escaped fifteen years of confinement, torture so deeply scarring mentally, emotionally and physically they could never recover. Abdellatif, the youngest was 18. He had been incarcerated since he was three years old. Maria, one of the sisters weighed barely 66 pounds. Malika, the narrator and her siblings had dug for years with spoons, hiding the dirt at night like in some kind of Hollywood movie. Yet this was their life. What had they done to deserve this imprisonment and animalistic treatment? Nothing at all.

Malika Oufkir was adopted at age five by King Muhammed V of Morrocco to be brought up with his daughter the princess who was of a similar age. Malika spent eleven years living at the court in the rarely seen world of the palace and harem. Her early years were spent with a spoiled, lavish and guilded, carefree existence, and yet a cage of sorts when considering the private, tightly controlled world of many Muslim women. She loved her adopted father and was a mischievous child who indulged in pranks. Yet she missed the company of her own mother, and her real father General Oufkir, who was to be the downfall of them all.

Malika tells her incredible true story with incredible humor and wit. At times when her family endured the unimaginable- I am shaking my head right now as I write this- she and her family persevered. The ingenuity, cleverness, and above all, courage is incredible. I don’t want to give anything away, but this is one of the most outstanding stories you will ever read. I have read it myself several times as it always reminds me not to take a single thing for granted. What are the actual scale of our daily problems, compared to the fact that somewhere in the world, a family was shut away for twenty years with only the sky for company, wishing for the room to live.

I was born and raised out on the fringes of the rainy Pacific Northwest on fishing boats and cold beaches with only a dog and kittens for company, and so my love of reading and creating stories started very early. My dad would illustrate my early stories and I would listen to him ramble about European history and warfare, eagerly asking questions about Kings, Queens and our own family history. In my adult life I am wife to a brilliant and hilarious web designer and mother to two wonderfully weird children whom I am trying to pass on to my love of learning about the world. I'm an amateur genealogist, amateur photographer and amateur history major haha. I'm good at doing amateur stuff lol. During the last couple years I finally turned my life-long urge to write into a serious endeavor and finished my first novel called (for now) The Stone and the Stars, about a dying dystopian society, and one girl trying to escape it before it collapses. While I finish cleaning up the edges on my novel for the umpteenth time, and before I send it out into the world, I've lately begun a novel about utopia, this time on Earth. I'm finally living up to the nerdy book-worm title my family 'lovingly' pinned on me from the time I was small, and finally doing that one thing I feel like I was born to do. Cliche and silly? Yes!
View all posts by Deanne →
Tagged  Malika Oufkir, Memoir, Michele Fitoussi, Morocco, Oprah's Book Club, Stolen Lives: Twenty Years in a Desert Jail, Women's Stories.
Bookmark the permalink.