Watch Me: by Anjelica Huston 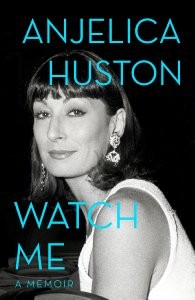 ‘Watch Me’ is the story behind the scenes of Anjelica Huston’s life in Hollywood diving right in at about age 25. That’s because yet again I failed to realize there was a first book. Oh well. I confess to mainly picking up this book because after flipping through it she references her work on Wes Anderson’s films which I love her in.

Unfortunately, while revealing plenty of intimate moments, especially her tumultuous years dating Jack Nicholson whom she was deeply in love with; the tone of the entire piece is much like Huston’s performances – aloof and mysterious. This is strange because Huston has no problem letting us see that she is actually a very emotional person, has had quite a lot of adventures, and has a good sense of humor about her misfortunes and misadventures. She loves solace, animals, the country and horses, cries easily and is somewhat insecure about herself – yet – there is still a professional detachment in all these details which can only come down to the fact that some people are meant to be authors and some aren’t.

This works well for a beach read, someone interested in a bit of the heyday of early Hollywood before excessive paparazzi and social media descended on the place and destroyed any privacy stars once had. Huston dutifully reports on most of her roles in tiny behind the scenes glimpses, but there is still little idea of knowing her personally. Which is okay I suppose. She can stay that alluring mysterious figure on film, probably one of those people better known in first person. I’m still going to go read the first book, it looks much more interesting. Stay tuned.

I was born and raised out on the fringes of the rainy Pacific Northwest on fishing boats and cold beaches with only a dog and kittens for company, and so my love of reading and creating stories started very early. My dad would illustrate my early stories and I would listen to him ramble about European history and warfare, eagerly asking questions about Kings, Queens and our own family history. In my adult life I am wife to a brilliant and hilarious web designer and mother to two wonderfully weird children whom I am trying to pass on to my love of learning about the world. I'm an amateur genealogist, amateur photographer and amateur history major haha. I'm good at doing amateur stuff lol. During the last couple years I finally turned my life-long urge to write into a serious endeavor and finished my first novel called (for now) The Stone and the Stars, about a dying dystopian society, and one girl trying to escape it before it collapses. While I finish cleaning up the edges on my novel for the umpteenth time, and before I send it out into the world, I've lately begun a novel about utopia, this time on Earth. I'm finally living up to the nerdy book-worm title my family 'lovingly' pinned on me from the time I was small, and finally doing that one thing I feel like I was born to do. Cliche and silly? Yes!
View all posts by Deanne →
Tagged  Anjelica Huston, Hollywood, Jack Nicholson, memoirs, Watch Me.
Bookmark the permalink.