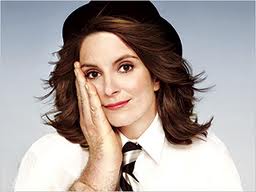 Having thoroughly enjoyed Kathy Griffin’s memoir, and having had fun reading Mindy Kaling’s book, one might expect Tina Fey’s memoir to be a steak at the party of hot dogs. Thus was I drooling a bit when I bit into this famous comedienne’s story. I want to say the steak cut like butter and for once it was medium rare like I ordered it; but I kind of got an overcooked lump of meat sitting sadly next to the mashed potatoes. Okay enough with the food references, but it makes things so easy!

Right away I was having an apathetic reaction to the book as Tina starts with a forward that is clearly meant to be funny, but kind of isn’t, and is kind vulgar (to be shocking?) and demeaning to the readers. Unfortunately I found this to set the tone for the entire book. The funny thing is but you would expect vulgarity out of Kathy Griffin, whose book turned out not to be vulgar; but Tina? Dear sweet Tina?

After a small bit about her hairy legs, period and other descriptive personal things that happened as a teen, Tina moves on quickly, describing how it felt being awkward and gangly growing up.

And in this- I found it a little odd that she wears being friends with gay people as a badge of honor. Kind of like name-dropping important people you know. Here’s a quote: “Lots of teenage girls have taken comfort under the wings of half-closeted gay boys,” (interruption, is this true?) “but how many of us can brag that her two best friends in high school were twenty-five-year-old lesbians?” The overall impression is that Tina feels this makes her superior in some way, and she went on and on about it. Kathy Griffin, (sorry to keep bringing her up) mentioned her affinity with the gay crowd also but not in a snotty manner. Now I’m wondering if a prerequisite of being funny is to get gay approval? Hmm.

It started to pick up some promise when she talked about her family a little. There are a few silly stories about her parents, and you briefly start to feel fond of her father, then…the most personal stuff is over. There is nothing really about how she feels or what kind of person she is. It isn’t a picture into her life, it is carefully chosen portions about what she doesn’t mind you knowing.

She holds herself apart from the reader and relies on mean, caustic remarks about everything to entertain. The rest of the book is about getting into the industry of course, except it’s not like Mindy Kaling, who describes the workplace in a hilarious manner. Flipping back through the pages I’ve found that there is actually more back-story about her earlier years in the industry and plenty of obscure descriptions like, “Donna was an enigma wrapped in bacon wrapped in a crescent roll.” ???

I found the ‘inside look’ at Tina Fey’s various jobs and time at SNL to be one of the most boring things I’ve ever read. She goes through her early job as a writer at SNL and learning how the business works through many veterans of sketch comedy from the show, but although this sounds interesting and juicy it really wasn’t at all.
There is a section where she takes the time to gather a few of the hateful emails she has gotten and address them in the most sarcastic, condescending manner imaginable. I’m sure all celebrities get those and they hurt, but aren’t many many more people a fan of Tina Fey?

Nearing the end of the book I found myself wondering how in the world Tina is so funny on her show 30 Rock, and if she was actually funny at all. Clearly she must be a talented writer…but then why does this book suck so bad? Maybe it just completely rubbed me the wrong way and another reader would derive great satisfaction out of this book, and I hate to be a hater…but I’m sending my steak back to the kitchen. More hot dogs please.

I was born and raised out on the fringes of the rainy Pacific Northwest on fishing boats and cold beaches with only a dog and kittens for company, and so my love of reading and creating stories started very early. My dad would illustrate my early stories and I would listen to him ramble about European history and warfare, eagerly asking questions about Kings, Queens and our own family history. In my adult life I am wife to a brilliant and hilarious web designer and mother to two wonderfully weird children whom I am trying to pass on to my love of learning about the world. I'm an amateur genealogist, amateur photographer and amateur history major haha. I'm good at doing amateur stuff lol. During the last couple years I finally turned my life-long urge to write into a serious endeavor and finished my first novel called (for now) The Stone and the Stars, about a dying dystopian society, and one girl trying to escape it before it collapses. While I finish cleaning up the edges on my novel for the umpteenth time, and before I send it out into the world, I've lately begun a novel about utopia, this time on Earth. I'm finally living up to the nerdy book-worm title my family 'lovingly' pinned on me from the time I was small, and finally doing that one thing I feel like I was born to do. Cliche and silly? Yes!
View all posts by Deanne →
Tagged  Bossypants, Memoir, Non-fiction, Saturday Night Live, SNL, Tina Fey.
Bookmark the permalink.