The Angry Tide: A novel of Cornwall 7: by Winston Graham 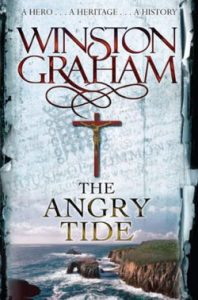 I’m going to keep this one short. Shorter than most of my posts by far! I think I’m still angry. As evidenced by the title, results are starting to pour in from all corners of the novel as sins of the characters’ past catch up with them.

Despite, or because of Demelza’s brief interlude with another man, she and Ross continue to dance around each other in an uneasy sort of truce. The early years of companionship and ease between them, the magic that drew the readers, seem to be totally gone and by this point in the series, I’m assuming it’s forever (edit: for good). Ross is now a member of Parliament, spending much of his time in London or abroad, and this seems to be his way of dealing with her possible infidelity.

As to Ross’ own infidelity, one must keep in mind that it’s easier to sin, than be sinned against. Apparently. But speaking of Ross’ sins, George Warleggan and Ross’ ex-love Elizabeth work very hard to save their own marriage, only for the entire storyline to combust in the saddest possible way. I lay that one on Ross’ doorstep.

Elizabeth’s cousin Morwenna and Demelza’s brother Drake finally have a happy ending though. Well, no they don’t. Okay sort of. Does Graham not believe in happy endings?

The reading of ‘The Angry Tide’ was tortured, unhappy and missing all of the cleverness and joy of the earliest novels. The characters of Ross and Demelza are mere sketches of themselves, the writing of them seems to have been completely forced. Unfortunately I can’t leave well enough alone because of the tragic ending and am now reading the eighth.

I was born and raised out on the fringes of the rainy Pacific Northwest on fishing boats and cold beaches with only a dog and kittens for company, and so my love of reading and creating stories started very early. My dad would illustrate my early stories and I would listen to him ramble about European history and warfare, eagerly asking questions about Kings, Queens and our own family history. In my adult life I am wife to a brilliant and hilarious web designer and mother to two wonderfully weird children whom I am trying to pass on to my love of learning about the world. I'm an amateur genealogist, amateur photographer and amateur history major haha. I'm good at doing amateur stuff lol. During the last couple years I finally turned my life-long urge to write into a serious endeavor and finished my first novel called (for now) The Stone and the Stars, about a dying dystopian society, and one girl trying to escape it before it collapses. While I finish cleaning up the edges on my novel for the umpteenth time, and before I send it out into the world, I've lately begun a novel about utopia, this time on Earth. I'm finally living up to the nerdy book-worm title my family 'lovingly' pinned on me from the time I was small, and finally doing that one thing I feel like I was born to do. Cliche and silly? Yes!
View all posts by Deanne →
Tagged  Cornwall, England, Fiction, Historical Fiction, Poldark, Romance, Ross Poldark.
Bookmark the permalink.