The Archer’s Tale: by Bernard Cornwell 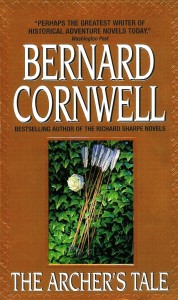 For a brief period of time in medieval Europe, the archers of England were a powerful foe unrivaled in battle by any other country. Boys took up archery at a young age enabling them to become excellent and strong archers who gave the English an advantage in warfare, especially during the Hundred Years War between England and France that took place between about 1330 to 1450. 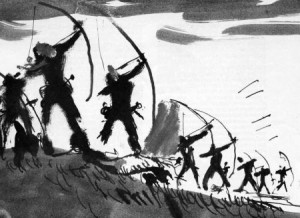 The Archer’s Tale follows Thomas Hookton, a young man fighting for England in France after his entire village was destroyed as a boy by French pirates. Thomas has a destiny wrapped up in a mysterious past, famous historical battles, and the Holy Grail itself. I like Thomas, he is quiet but efficient and has an under-stated manner that makes it easy to root for him.  He is an anti-typical man of the soldiers not being greedy or slovenly, or given to pillaging after battle which gives a nice contrast to most of the soldiers in the book who are all of the above. Thomas is no hero; but he is a good man who finds a romance in the most unlikely of places. His initial quest to find his father’s killer takes him far afield in the King’s army and follows him as he matures from young warmongerer to a man reluctantly sworn to find a secret enemy of the Church, to complicate matters further his enemies are his own relatives.

None of this is new ground if you’ve read this author before, and I would say so far it’s far less brilliant than some of his other series, but still overall a good read. Bernard Cornwell is the unrivaled master of historical battle scenes in my opinion, everything he writes is cut and dried. It is not gory or explicit for the sake of shock value, it’s matter of fact mixed with quick action scenes that give you a real sense of being there both visually and emotionally- but you aren’t spared the details either. That stated, the climax of this story is the battle of Crecy, France, where the longbow of England produced one of the first triumphs over a larger army who had better ground.  The Battle, as I feel it should be called, is Cornwell’s claim to fame, and it takes up a hefty portion of the reading since he is a historian when it comes to famous battles and presents them the way they took place. It feels lengthy for someone who isn’t interested in the actual violent parts of the books.

I find myself reading his books because of the incredible skill in portraying whatever time period he’s put you in, the way he humanizes people who just seem like distant figures in the mists of time; and the believability of it all. You know this isn’t Hollywood where they threw together a costume and set, you feel like you’re getting a look at the past the way it really was. The downside is a bad taste in your mouth if you aren’t (even if you are) familiar with the amount of violence war contains. Although it is never gratuitous, I would prefer a lot less of it since his skill in writing the rest of it is pretty high in my opinion.

This is the first book in a three-part series called the Grail Quest, and as such I will probably start the next book since it seems to be veering away from a specific historical battle as was the case in this novel; because that I know would just be more of the same, and I’m really tired of reading about knights riding over people or people being studded with arrows (I mean what did I expect?). Readers who typically read crime novels might find themselves on familiar ground when it comes to that stuff, but this more than that, it’s a well-written story of loss, war, and love.

I was born and raised out on the fringes of the rainy Pacific Northwest on fishing boats and cold beaches with only a dog and kittens for company, and so my love of reading and creating stories started very early. My dad would illustrate my early stories and I would listen to him ramble about European history and warfare, eagerly asking questions about Kings, Queens and our own family history. In my adult life I am wife to a brilliant and hilarious web designer and mother to two wonderfully weird children whom I am trying to pass on to my love of learning about the world. I'm an amateur genealogist, amateur photographer and amateur history major haha. I'm good at doing amateur stuff lol. During the last couple years I finally turned my life-long urge to write into a serious endeavor and finished my first novel called (for now) The Stone and the Stars, about a dying dystopian society, and one girl trying to escape it before it collapses. While I finish cleaning up the edges on my novel for the umpteenth time, and before I send it out into the world, I've lately begun a novel about utopia, this time on Earth. I'm finally living up to the nerdy book-worm title my family 'lovingly' pinned on me from the time I was small, and finally doing that one thing I feel like I was born to do. Cliche and silly? Yes!
View all posts by Deanne →
Tagged  Bernard Cornwell, Crecy, England, France, Longbow, Medieval, The Archer's Tale, The Hundred Years War.
Bookmark the permalink.