On The Trail of Genghis Khan: by Tim Cope

In 2004 Tim Cope, a young Australian adventurer, set out to do what hadn’t been done since ancient times: to travel on horseback across the entire length of the Eurasian steppe, from Karakorum, the ancient capital of Mongolia, through Kazakhstan, Russia, Crimea and the Ukraine to the Danube River in Hungary. His motive? To learn what it truly means to be a nomad in these modern times, to lose himself in the grand beauty of the steppes, and to connect the sometime distant past to those still living in these regions. 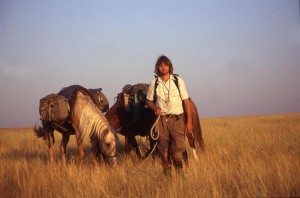 As far as travel journals go this is pretty far up there. I was unsure during the first handful of pages as Cope fills the reader in on some history of Mongolia if this was going to be a dry read, but Cope has skillfully mixed the ‘present’ which he put together from his travel journals, with in-depth recounting of the history of the land he is trekking through. Cope had never ridden a horse until preparing for this trip, and he stayed in the saddle during some of the most challenging and dangerous landscapes on the planet. More than once he found himself at the mercy of the local inhabitants, and in doing so uncovered some of the most humble and giving people on the planet. 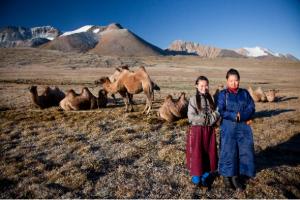 It wasn’t all fun and games. Cope faced many real dangers like snowstorms, horse thieves, and drunk Russians. Everything is recounted with a bit of a detachment as if he doesn’t realize how awe-inspiring what he’s doing really is, and a decent and enduring sense of humor.

I learned about the Mongolian peoples of the steppes and how so many of their traditions have been passed family to family back into the mists of history when Genghis Khan and the Mongols swept Asia inspiring terror in all, leaving legacies that last to this day.

I learned how this ebb and flow of conquest swept peoples and cultures as far west as the Danube in Hungary, and how millions have been displaced from their homelands and relocated at whim by larger world powers such as China and the Soviet Union. I learned some of the terribly tragic history of those in Kazakhstan and of many of lesser known tribes like the Kalmyks who underwent something nearly unknown in the west and denied in Russia as the Holodomor

On that and many other issues I will only say that the Soviet Union was a much bigger monster than I’d ever imagined and overall I believe, rivals the amount of suffering if not more, inflicted by the Nazi party. Sorry Russia, not sorry.

More than anything what makes this book a jewel is the wonderful and sometimes wacky humans Tim Cope met, lived and traveled with. The dark side of humanity constantly pops up but is always remedied by the enduring warmth of the real human spirit. 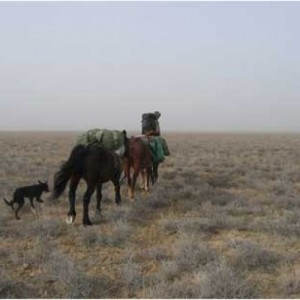 With the little pack of animals Tim Cope came to call his family, he has let us into a journey of a lifetime, not undertaken by any other like I said since the Middle Ages, and shown us peoples and histories we’d never otherwise experience. Best of all you can find videos he took on Youtube, and there are specials and documentaries he made as well. And he’s cute 😉 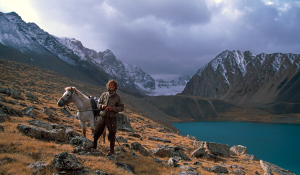 I was born and raised out on the fringes of the rainy Pacific Northwest on fishing boats and cold beaches with only a dog and kittens for company, and so my love of reading and creating stories started very early. My dad would illustrate my early stories and I would listen to him ramble about European history and warfare, eagerly asking questions about Kings, Queens and our own family history. In my adult life I am wife to a brilliant and hilarious web designer and mother to two wonderfully weird children whom I am trying to pass on to my love of learning about the world. I'm an amateur genealogist, amateur photographer and amateur history major haha. I'm good at doing amateur stuff lol. During the last couple years I finally turned my life-long urge to write into a serious endeavor and finished my first novel called (for now) The Stone and the Stars, about a dying dystopian society, and one girl trying to escape it before it collapses. While I finish cleaning up the edges on my novel for the umpteenth time, and before I send it out into the world, I've lately begun a novel about utopia, this time on Earth. I'm finally living up to the nerdy book-worm title my family 'lovingly' pinned on me from the time I was small, and finally doing that one thing I feel like I was born to do. Cliche and silly? Yes!
View all posts by Deanne →
Tagged  Asia, biography, Crimea, Holodomor, horseback, Hungary, Kalmyk, Kazakhstan, Mongolia, On the Trail of Genghis Khan, Russia, Tim Cope, travel.
Bookmark the permalink.