The Ringworld Engineers: by Larry Niven

Behold the ugliest cover art I’ve seen in a while

First I want to say that reading this was a massive headache, and I’m headed right out to read the next. I was obviously split as to what to rate this so I went right down the middle.

This why it is missing 2.5 kitten stickers.

The math is a muddle for a poor mortal like myself, the dialogue can be great or alternately ‘huh?’ out of character. Niven’s visual wording is extensive, but I only got a clear picture in my head of approximately 5% of what happened. Whether it was the extensive technical language, the landscape, what the deuce the ship was doing, ect. I don’t know what happened- if Larry Niven just scribbled this book off in between more important projects or what- but I had an incredibly tough time understanding everything; which creates a problem as I couldn’t really visualize a lot of the scenes besides the people, and a rough estimation of scenery. There is also a lot of disconnect between scenes and descriptions.

“I wouldn’t think so. Cameras record that the shadow square ring moved aside to allow the beam to pass, and constricted elsewhere, presumably to protect the land from increased insolation. We cannot assume that this same shadow square ring was manipulating the photosphere magnetically. An intelligent engineer would design two separate systems.”

And I picked a paragraph I understood. I fully expect it’s a lot of over-my-head science. 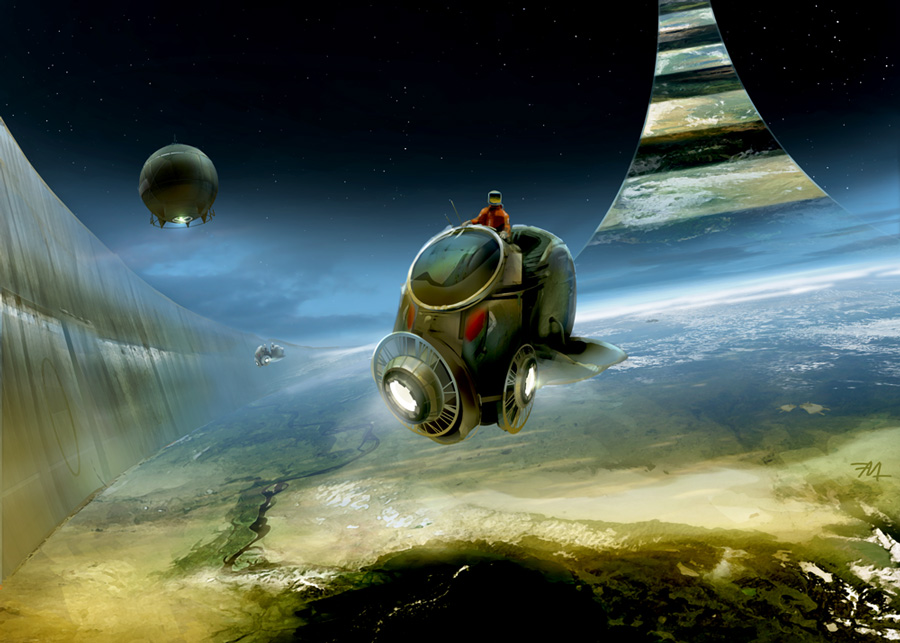 If only I was able to visualize it like this a little more often. Art by Frank Leweke

Secondly, there is a pervasive fascination with PG-content sex. I am practically puritanical about this anyways. While not really minding it in a story most of the time, I prefer it to be very vague. It was in the last book too but I didn’t complain because I’m familiar with the mindset of a lot of authors that there will be few sexual taboos in the future, but it really added nothing to the story, and to be frankly sexist I thought ‘a man totally wrote this.’ “She had fine controls of the muscles of her vagina.”- is an actual line. The main character guy (Louis) will do anything (inter-species y’all) anywhere, and often. Besides that his character is fine.

Here is why it did score those 2.5 kitten stickers. This part will be shorter because I’m better at complaining. See Above.

I haven’t read a fun original story like this in a long time and it reminds me of why I originally loved science-fiction. I think Niven’s imagination is wonderful. The characters are funny, wry, and very human whether actually humanoid or not.

Here is a paragraph I liked. (The two characters Chmeee is a giant sentient cat-thing with prickly sense of honor and Louis, a 200 year old human who is chronically cynical, approach a small settlement that has never seen technology like theirs, and they scared off the herdbeasts with their lander.)

“As Chmeee and Louis came near, the natives swarmed. They came over the fence in a bounding swarm, screaming at each other in falsetto. They were small and red and human-shaped, and they ran like demons. They carried nets and spears. Louis saw Chmeee draw his stunner, and drew his own. The red humanoids darted past Louis and Chmeee and kept going.
Chmeee asked, ‘Have we been insulted?’
‘No, they’re off to turn the stampede of course. I can’t even fault their sense of proportion. Let’s go in. Maybe somebody’s home.'”

You know, that paragraph was actually hard to pick out. Good story, not so good writing for me. Maybe I should knock that half sticker off the kitten. Still, I’m reading the next book because the story is so fascinating. Who knows, maybe it’ll be better, maybe I’ll swear off Ringworld books forever.

I was born and raised out on the fringes of the rainy Pacific Northwest on fishing boats and cold beaches with only a dog and kittens for company, and so my love of reading and creating stories started very early. My dad would illustrate my early stories and I would listen to him ramble about European history and warfare, eagerly asking questions about Kings, Queens and our own family history. In my adult life I am wife to a brilliant and hilarious web designer and mother to two wonderfully weird children whom I am trying to pass on to my love of learning about the world. I'm an amateur genealogist, amateur photographer and amateur history major haha. I'm good at doing amateur stuff lol. During the last couple years I finally turned my life-long urge to write into a serious endeavor and finished my first novel called (for now) The Stone and the Stars, about a dying dystopian society, and one girl trying to escape it before it collapses. While I finish cleaning up the edges on my novel for the umpteenth time, and before I send it out into the world, I've lately begun a novel about utopia, this time on Earth. I'm finally living up to the nerdy book-worm title my family 'lovingly' pinned on me from the time I was small, and finally doing that one thing I feel like I was born to do. Cliche and silly? Yes!
View all posts by Deanne →
Tagged  classic sci-fi, Known Space, Larry Niven, Ringworld, sci-fi, Science Fiction, The RIngworld Engineers.
Bookmark the permalink.