Resistance: A Woman’s Journal of Struggle and Defiance in Occupied France: by Agnes Humbert, translated by Barbara Mellor 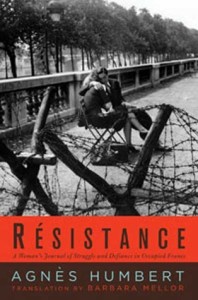 I haven’t had anything to read in weeks which is torture – the first phrase that came to my mind, commonly used by us for things like being thirsty or wanting a burger.
However, what Agnes Humbert went through was real torture, and shed light on the little known perils of labor camps and political prisoners during WWII. Agnes was 43 years old in 1949. She was a respected art historian, a left-wing intellectual and a divorced mother of two grown sons.

Within months everything she knew changed as the Nazis occupied Paris and she joined the mass exodus of Parisians from the city. It is described in memory in a hauntingly beautiful scene as Paris fell, the sky was filled with columns of jet-black oily smoke that slowly blotted out the sun as the petroleum and gasoline refineries were set on fire by retreating French troops.

Almost immediately, incredibly but in a testament to Agnes’ character she returns to Paris and immediately strikes up one of the first, if not the first, resistance group to the occupation. Together with her various coworkers at the Musee des Arts et Traditions Populaires where she worked, they moved with incredible swiftness to print pamphlets and any kind of material they could to keep the spirit alive in their fellow Parisians. Unfortunately this group was intercepted by the Gestapo swiftly and what followed was four years of imprisonment first in France, then in Germany. Agnes in 1921. See that determined jawline!

What makes this journal incredibly exceptional is simply the personality behind it. In stark contrast to ideas about social norms of women, Agnes is described by a well-known and respected male of the Resistance movement as ‘a woman of strong and energetic temperament, impetuous and reckless by nature.’ But that’s really not the half of it. Almost as fascinating as Agnes’ courage is her wit and humor. I don’t think I’ve ever, ever read a wartime memoir or journal containing such humor. Agnes never lost her ability to find something to laugh at, even in the face of extreme pain and danger, and I found the product of that is that the suffering stands out in even starker contrast to her light words.

An example or two: “After telling me that it is not the administration’s job to keep me in aspirin,” she has the flu by the way, “Frau Vicom gives me a hearty punch in the stomach, and I go flying down the stairs. I manage to grab the stair rail halfway down and so save myself from injury. I spend the rest of the day reflecting on German remedies for the flu.”

On finding a way to pass time with a wadded up ball of paper: “One day my ball games must have become too riotous. Mme Blumelein flings open my cell door. She finds it reprehensible that I should still be playing games at my age. She scrutinizes the ball, interrogates me regarding its provenance, then makes me undress and searches me from top to toe; she runs her fingers through my hair, presumably to be quite sure that I haven’t concealed more games in it. From all this I conclude that playing ball games in Germany must be an extremely risky business.”

But you are never allowed to forget where she is nor the brutality of her situation, far from it. Agnes Humbert and her fellow prisoners endured indescribable humiliations; extreme temperatures and starvation, viciously painful tasks that reduced them to near blindless with useless, mangled hands from working day in and day out with acid in the factories. This takes up most of the book, but is not as depressing as you might think. It is shocking and unnerving yes, but still Agnes finds beauty around her, sometimes mirth, in her fellow women prisoners. She finds unexpected kindnesses sometimes from the guards or her German wardesses.

She never loses her courage as seen in a small example when the workers looked into the sky and saw a comforting sign drawn by an airplane, “Will he ever know, that unknown airman, how many hearts swelled with joy on this spring day because of him? Will he ever know this emblem of work – of work freely consented to – means to a humiliated prisoner exhausted by slave labor?”

She may be unique in being able to see both good and bad in her German overlords. After the war is over upon learning of what went on in the concentration camps, Agnes is humble enough to dismiss her own pitiful sufferings and acknowledge it could have been much worse; and that when the labor camp director pointed a pistol in her face on the last day and she laughed at him (yes still after all that time!) she had barely escaped the fate that met many others in the camps upon the fleeing of the German armies. The infamous Prison du Cherche-Midi in France. Agnes found support by speaking to the other prisoners here through cracks in the doors although they never saw each other.

Just when you wonder how she survived, the American’s relieve the camp, and what does Agnes do? Surely go home and count her blessings. No. From the first day of relief this indomitable woman took charge of her fellow prisoners helping keep order in the following days of mayhem and looting. She is astounding in her seemingly effortless ability to switch from debilitated prisoner to determined and organized Nazi hunter.

Yep she ambled around the countryside working with the American army to hunt down all those who were trying to ‘melt away’ from their deeds, while also making a conscious effort to specify lists of those Germans who were under duress, who were anti-nazi, or even those who were simply casualties of their situation- collateral damage of the war. I find any person able to have their freedoms and rights viciously abused for four endless years that can then turn around and still be a humanitarian astounding.

Agnes wrote her book called Notre Guerre ‘Our War’ the very next year and settled down, of course in Paris, of course to form up more groups for French nationalism; the very next year. While most memoirists wrote years even decades after the fact, this woman was determined to put down her fresh, clear memories of the years in between when she actually had her diary (she scribbled scraps onto her copy of Descartes that went everywhere with her). She published it in 1946 and it seems although lauded, only available to read to a select few and only published in English in 2004 or so which is a crime in itself. She was determined to write the pure truth of her experiences and with full names of participants, also very unusual, of both her fellow resistance workers and the Germans.

In itself this is a unique and moving story, I’m glad I took a chance on it, because I’ll never forget it. 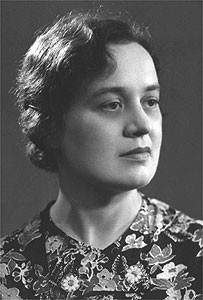 Ps. Apologies for lack of proper accents on French letters, if I figure that out in WordPress I’ll add it.

Share the post "Resistance: A Woman’s Journal of Struggle and Defiance in Occupied France: by Agnes Humbert, translated by Barbara Mellor"

I was born and raised out on the fringes of the rainy Pacific Northwest on fishing boats and cold beaches with only a dog and kittens for company, and so my love of reading and creating stories started very early. My dad would illustrate my early stories and I would listen to him ramble about European history and warfare, eagerly asking questions about Kings, Queens and our own family history. In my adult life I am wife to a brilliant and hilarious web designer and mother to two wonderfully weird children whom I am trying to pass on to my love of learning about the world. I'm an amateur genealogist, amateur photographer and amateur history major haha. I'm good at doing amateur stuff lol. During the last couple years I finally turned my life-long urge to write into a serious endeavor and finished my first novel called (for now) The Stone and the Stars, about a dying dystopian society, and one girl trying to escape it before it collapses. While I finish cleaning up the edges on my novel for the umpteenth time, and before I send it out into the world, I've lately begun a novel about utopia, this time on Earth. I'm finally living up to the nerdy book-worm title my family 'lovingly' pinned on me from the time I was small, and finally doing that one thing I feel like I was born to do. Cliche and silly? Yes!
View all posts by Deanne →
Tagged  Agnes Humbert, France, German, Notre Guerre, Occupied France, Occupied Paris, Our War, political prisoners, Resistance, WWII.
Bookmark the permalink.