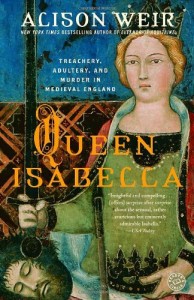 How can you not be interested in a Medieval Queen nicknamed ‘The She-Wolf of France’? Queen Isabella was a model citizen and dutiful wife – until she wasn’t. Queen Isabella amassed herself an army and deposed her husband, King Edward II, in the first successful invasion of English shores since the Conquest (1066). She was awesome. In an age spanning thousands of years where women were commonly supposed to be heavily veiled and short on brains, this queen chose her own future. At first though, she was young and pliable.

Where then did a good queen go wrong? Was Isabella really a ‘she-wolf’- a moniker applied in later centuries- all that was ‘unfeminine and voracious, wicked and adulterous’? What could Edward II possibly have done to deserve that fate, HOW does a medieval queen topple her own king? Alison Weir is a favorite author of mine, and she set about to examine those questions, and perhaps to rehabilitate the image that was retained of Isabella down through history as a very, very naughty girl.

I gave this book a 2.5 because of issues with readability. Weir is a concise writer but very detailed and you must be really versed in English names and titles to go along with it. I’ve read a decent number of books by Weir now, and it’s as if she is not trying to interest people in her works anymore, just pumping out words. I gave up multiple times on remembering who was who, which is a shame when you realize ‘Surrey’ (picked a name out of nowhere) is actually a first cousin, or an uncle, or such a thing which makes it all rather ‘in the family’ than just some titled Earl who is cranky about his land being taken away.

Land being taken away, I might add, is basically the great evil Edward II committed, shamelessly heaping ridiculous wealth upon his favorite and neglecting his Queen and the Powerful People Who Matter, to the point where they would support the queen taking him down. Curiously Isabella later fell prey to the same folly. In the end, Isabella’s son Edward III would become one of England’s greatest kings, and along with his well-loved Queen Philippa, lay a rest to the nasty business between his parents.

This really is a very interesting look at history and Isabella herself, arguably one of histories bravest and toughest women. Unfortunately the information used to get to the truth tends to be through household transactions and travel expenses. Hardly the stuff of interest, and this being a non-fiction book, leaves frustrating holes in the truth of the matter.
We can only speculate on many things, and speculate Weir does, yet with an air of finality as a historian- which clearly should not be the case.
Speculation does not equal truth.
In any case, Weir has exhausted the records in examining what can be found about Queen Isabella and in truth left me wanting to know a lot more than maybe we ever will about this indomitable woman.

I was born and raised out on the fringes of the rainy Pacific Northwest on fishing boats and cold beaches with only a dog and kittens for company, and so my love of reading and creating stories started very early. My dad would illustrate my early stories and I would listen to him ramble about European history and warfare, eagerly asking questions about Kings, Queens and our own family history. In my adult life I am wife to a brilliant and hilarious web designer and mother to two wonderfully weird children whom I am trying to pass on to my love of learning about the world. I'm an amateur genealogist, amateur photographer and amateur history major haha. I'm good at doing amateur stuff lol. During the last couple years I finally turned my life-long urge to write into a serious endeavor and finished my first novel called (for now) The Stone and the Stars, about a dying dystopian society, and one girl trying to escape it before it collapses. While I finish cleaning up the edges on my novel for the umpteenth time, and before I send it out into the world, I've lately begun a novel about utopia, this time on Earth. I'm finally living up to the nerdy book-worm title my family 'lovingly' pinned on me from the time I was small, and finally doing that one thing I feel like I was born to do. Cliche and silly? Yes!
View all posts by Deanne →
Tagged  Adultry and Murder in Medieval England, Alison Weir, biographies, Edward III, historical, History, Medieval Queens, Non-fiction, Queen Isabella, Queen Isabella: Treachery.
Bookmark the permalink.