Harvest of Stars: by Poul Anderson 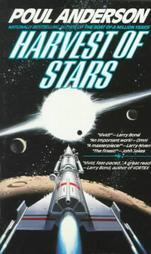 Look at this gorgeous cover. LOOKATIT! Now walk away because it was horrid and I hated it. I tried to give it up about four times, I even read two books in-between. A few days ago I randomly read about ‘PuppyGate’ wherein it seems a bunch of people argue about the 2015 Hugo awards and vote brigading. Then I read Brad R. Torgersen’s comment on his blog and it perfectly summed up what was wrong with ‘Harvest of Stars’:

“A few decades ago, if you saw a lovely spaceship on a book cover, with a gorgeous planet in the background, you could be pretty sure you were going to get a rousing space adventure featuring starships and distant, amazing worlds…The book has a spaceship on the cover, but is it really going to be a story about space exploration and pioneering derring-do? Or is the story merely about racial prejudice and exploitation, with interplanetary or interstellar trappings?”

The book gets one kitten sticker for a semi-interesting concept: downloading a person’s mind into a server so-to-speak and continuing on as an electronic conscious being; and a half star because it’s Poul Anderson who has written other great stuff.

First of all, the conversation is sporadic in quality, insincere in content, and is peppered with Spanish where it doesn’t belong as some kind of future-language but it doesn’t make sense. I get no sense of the main character Kyra Davis as a person at all. She seems to think with her loins, and has confusing scenes like this, taken from the same paragraph:

“‘Then we’ll fight!’ she cried, a fist aloft where she had leaped erect as she listened. Rage: ‘And I- do I have to huddle here waiting?'”
“Kyra glared at them. ‘Don’t you want those matones off your backs?’ She gulped. ‘I’m sorry. Por favor, excuse me. After all your kindness-‘”
“Kyra stooped down to hug her. ‘And y-you have children,’ she stammered.”
“Yes, Kyra thought, they had their work. She had her schooling in patience to abide while events spun themselves out, her relaxation techniques, her mantras and memories.”

She is sporadic like that in nearly every scene, without any warning to the reader as to the cause, and add in sexual attraction any time there’s a male around. I don’t get these authors. As a woman I can tell you my loins don’t warm up every time I see a man, and I don’t become helpless.

Secondly, you can’t have descriptions like this:
“They stood at a parapet overlooking the unborn cosmos. Their own radiance illuminated the vast walls and spires of their stronghold. Against its ramparts, beneath primordial night, formlessness blazed and raged. Waves, a million light-years from trough to crest, surged in to burst with a roar and a song of energies. Spindrift stars, flung high, exploded as supernovae, a dreadful glory strewing the stuff of worlds to be across emptiness.”

And quotes like this:
“‘Actually, I think eco-facism is just one side of the evil. It’s fascism generally, or puritanism if you like. H. L. Mencken once defined a puritan as a man who waskes during the night in a cold sweat at the thought that somebody, somewhere, may be having a good time. SO let’s protect the poor, ignorant consumer from himself. Tax alcohol, tobacco, and junk food out of reach and propagandize against them with the aim of eventual prohibition. Indoctrinate and train the school kids, draft them into teams for the proper sports, Kraft durch Freude. Tax fuel a thousandfold; joyriding is wicked, and keeping your house at a comfortable temperature is antisocial. Make sure every medicine bottle needs a hacksaw to open, or a charge of nitroglycerin.
Meanwhile of course, onward with uplift. Require employing the right proportion of men, women, in-betweens, ethnics, and ‘disadvantaged’. Have strict quotas in the colleges for the bright and literate and those who work at their studies, to make room for the ‘mentally special’. Keep books with insensitive remarks in them off library shelves and out of stores. Better yet, don’t let them be published. Keep ears stretched for wrong talk, reprove the offender publically, haul him into court and fine him if you can. Or beat him up. No charges will be brought-
Rats! There I went again. What a waste of a beautiful sunset. I do apologize.'” 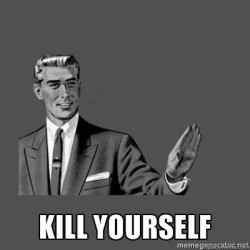 Hey I don’t care how long that quote was, go back and READ IT ALL! I had to read the whole book. Yeah no one wants to live in a society like that, but I didn’t come here for social politics, ick.

Oh you want some more descriptions? Here ya go!

“She harked back to stones whirling frosty amidst stars, never betrodden before she found them; sunrise rousing pinnacles out of shadow from a horizon-long chasm on Mars; storms in Jupiter, seen from a shelter on a glacial moon around which radiation , lovely swirl-patterns that could swallow all Earth; jewelwork Saturn; Gothic needles piercing a Titanian sky- How much of yonder adventure and majesty had she really won to by herself? Always it was the machines, suit or ship or outpost fortress, sensor and computer and effector, that nurtured and enabled. How much machine had she become, who had never yet felt life quicken beneath her heart nor even wanted to?”

Just save yourself the effort, unless you are one of those horrid types who enjoys philosophy and human studies. Shudder.

This just in, there are more in this series!! Zenu save us.

I was born and raised out on the fringes of the rainy Pacific Northwest on fishing boats and cold beaches with only a dog and kittens for company, and so my love of reading and creating stories started very early. My dad would illustrate my early stories and I would listen to him ramble about European history and warfare, eagerly asking questions about Kings, Queens and our own family history. In my adult life I am wife to a brilliant and hilarious web designer and mother to two wonderfully weird children whom I am trying to pass on to my love of learning about the world. I'm an amateur genealogist, amateur photographer and amateur history major haha. I'm good at doing amateur stuff lol. During the last couple years I finally turned my life-long urge to write into a serious endeavor and finished my first novel called (for now) The Stone and the Stars, about a dying dystopian society, and one girl trying to escape it before it collapses. While I finish cleaning up the edges on my novel for the umpteenth time, and before I send it out into the world, I've lately begun a novel about utopia, this time on Earth. I'm finally living up to the nerdy book-worm title my family 'lovingly' pinned on me from the time I was small, and finally doing that one thing I feel like I was born to do. Cliche and silly? Yes!
View all posts by Deanne →
Tagged  Harvest of Stars, Poul Anderson, PuppyGate, sci-fi, Science Fiction.
Bookmark the permalink.