The Four Swans: A Novel of Cornwall 6: by Winston Graham 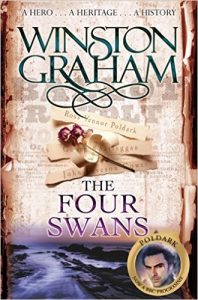 ‘The Four Swans’ is the SIXTH Poldark novel taking place in Cornwall, England just before the year 1800. At this point in the saga, everything could be going better. This novel is strange and dark, dealing with themes of adultery, despair, suspicion and jealousy. [Skip to the end if you’re short on time.]

My husband and I were discussing yesterday, after I was reading the eighth book and kept letting out sighs, why so many dramas and novels cover the lives of that tiny upper crust of British society, when they were such a small, seemingly selfish and snobby portion of humanity as a whole. I think the answer lies in the themes that always interest people: love, hate, revenge, money- combined with the peculiar way society was set up at the time.

Men and women of money were married without expectation of love, rather to protect the money and names of the elite families which formed the backbone of the entire culture; yet they were not expected to live a loveless life so many turned to affairs which as long as they were conducted discreetly (for women at least) were entirely expected and common of the time period.

Where poverty, while conjuring images of ignorance and coarse living, might actually lead to stronger unions between man and wife, the opposite seems also true. Money and looks, conjuring pretty images of beautiful estates and glittering parties; breed all kinds of base human emotions…and we readers and viewers feed on these greedily as long as it isn’t happening to us!

So, without covering the plot because I hate to do that for some reason (sorry), Graham examines all manners of relationships regarding women and wives without shying away from the banal or sometimes brutal- a man in the novel repeatedly rapes his own wife, yet is a clergyman and it is noted that rape pertaining to one’s own wife did not exist at that time. Another man, Ross Poldark’s nemesis George Warleggan broods and is devastated by attacks of jealousy over the suspicion that his son Valentine is not his own. Unfortunately we as readers know it is indeed Ross’ son, and the unintended consequence of Ross’ ugly act a few books back which reverberate through at least two more novels.

Another consequence of Ross’ act is the opening made in his wife Demelza’s heart which makes the overtly strong advances of another man not only palatable to her, but inviting.

Again Winston Graham does not shy away from the long-term effects of decisions his characters make, or the ugliness that results. At this point in the saga, I’m truthfully wishing I’d quit at book three. I strongly disagree with Demelza’s actions, or more-so the incredibly insulting words of her lover while wooing her that love should be spread around and not kept just for her husband. This isn’t a hippie commune! And Graham rightfully points out, what of loyalty and trust? Are they to be given away easily also? Okay so Graham gets it but spells it all out anyways. I’m starting to wonder what went on in his own marriage.

The fun is all but completely gone from the novels, the spark and the freshness of the characters. Ross wonders SO OFTEN about the seemingly repetitive quality of life, that I just wish he’d get on anti-depressants. It’s one thing to feel angsty about the world and your family and lot in life in your 20s, it’s another for a grown man to still be so moody. Overall, ‘The Four Swans’ is still so readable, but now in a can’t-look-away car-crash type of way.

I was born and raised out on the fringes of the rainy Pacific Northwest on fishing boats and cold beaches with only a dog and kittens for company, and so my love of reading and creating stories started very early. My dad would illustrate my early stories and I would listen to him ramble about European history and warfare, eagerly asking questions about Kings, Queens and our own family history. In my adult life I am wife to a brilliant and hilarious web designer and mother to two wonderfully weird children whom I am trying to pass on to my love of learning about the world. I'm an amateur genealogist, amateur photographer and amateur history major haha. I'm good at doing amateur stuff lol. During the last couple years I finally turned my life-long urge to write into a serious endeavor and finished my first novel called (for now) The Stone and the Stars, about a dying dystopian society, and one girl trying to escape it before it collapses. While I finish cleaning up the edges on my novel for the umpteenth time, and before I send it out into the world, I've lately begun a novel about utopia, this time on Earth. I'm finally living up to the nerdy book-worm title my family 'lovingly' pinned on me from the time I was small, and finally doing that one thing I feel like I was born to do. Cliche and silly? Yes!
View all posts by Deanne →
Tagged  Cornwall, England, Fiction, Historical Fiction, Poldark, Romance, Ross Poldark, saga, Winston Graham.
Bookmark the permalink.