Elizabeth I: The Novel: by Margaret George 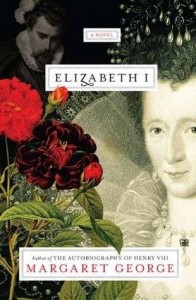 Elizabeth I of England may be one of history’s most written about monarchs, perhaps for the reason that we know so much about her, yet the true woman remains elusive. A great dissembler and brilliant judge of character, Elizabeth was able to portray herself as she wished, hiding the mortal weaknesses she must have possessed. This fascination led me to read yet another book about her, this, by Margaret George, a competent yet somewhat boring account of Elizabeth during her middle years where she actually peaked as Queen (overseeing not one but three defeats of the Spanish Armada) to her last days.

Interwoven is the story of a very different woman, Elizabeth’s first cousin Lettice Knollys. Picking up as the story does during Elizabeth’s mid-fifties, there is a lot to catch up on. Lettice apparently insulted the Queen to such an extent that she hasn’t been to court in twenty years, I gather it’s because she married Elizabeth’s great love Robert Dudley. Their son, another Robert continues to be intertwined in the Queen’s life right up to the end, and because of that I suppose Lettice is a figure of interest, but truthfully she is only presented as Elizabeth must have seen her, a carnal woman who is interested only in social climbing. As an aside: she does have some dalliance with a very fictional version of Shakespeare which is fun to read.

Unfortunately historically Lettice lost everything in the end (although outliving Elizabeth for a good many decades), and from her point of view it must have only been through Elizabeth’s pleasure or displeasure. Seeing the Queen from this helpless point of view highlights the selfish privilege given to monarchs of dictating the lives of others without even realizing it; and illustrates how very much the accident of one’s birth mattered in the Middle Ages.

While a good read, ultimately Elizabeth’s second half of her reign is fairly uninteresting, although it’s impossible to be unimpressed with her unfailing selflessness when it came to governing, and that itself lent to her great and enduring reputation of England’s greatest Queen.

I was born and raised out on the fringes of the rainy Pacific Northwest on fishing boats and cold beaches with only a dog and kittens for company, and so my love of reading and creating stories started very early. My dad would illustrate my early stories and I would listen to him ramble about European history and warfare, eagerly asking questions about Kings, Queens and our own family history. In my adult life I am wife to a brilliant and hilarious web designer and mother to two wonderfully weird children whom I am trying to pass on to my love of learning about the world. I'm an amateur genealogist, amateur photographer and amateur history major haha. I'm good at doing amateur stuff lol. During the last couple years I finally turned my life-long urge to write into a serious endeavor and finished my first novel called (for now) The Stone and the Stars, about a dying dystopian society, and one girl trying to escape it before it collapses. While I finish cleaning up the edges on my novel for the umpteenth time, and before I send it out into the world, I've lately begun a novel about utopia, this time on Earth. I'm finally living up to the nerdy book-worm title my family 'lovingly' pinned on me from the time I was small, and finally doing that one thing I feel like I was born to do. Cliche and silly? Yes!
View all posts by Deanne →
Tagged  Elizabeth I: A Novel, Margaret George, Queen Elizabeth, Spanish Armada.
Bookmark the permalink.