Well well well, I’ve finally read a current book, courtesy of my new library card. I’ve been liking biographies and memoirs lately so I thought the story of an American Princess, raised in secluded luxury oblivious to the dangerous world her gangster father kept from her would be an amazing … Continue reading

In 1348 twenty-two year old Joanna, Queen of Naples (part of Italy at the time) and granddaughter of famed ruler Robert the Wise, stood before the Pope to answer the charges of murder in the brutal death of her husband, and it wasn’t the last time Joanna would have to … Continue reading

Wherein I climb a soapbox and try to sort out my feelings and ramble a bit; and if you understandably do not want to read it, skip to /endrant/ I left this book on a to-read pile for a long time, fearing the ‘feels’ I knew that come along with … Continue reading 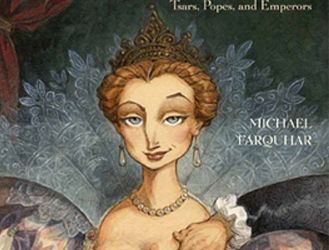 “All I say is, kings is kings, and you got to make allowances.” -Mark Twain, The Adventures of Huckleberry FInn Continue reading

It’s a good thing I bought this completely clueless of it’s content at the bookstore because I’d be headed back out to go buy it right now if not. Who were the Mitford sisters and what is their place in history? I had never heard of these women who were talked about world-wide in the periods before and after the second world war, but immediately upon delving in I couldn’t put it down. It is hard to believe these women from the same family were at the crucial points in history that fate placed them. They each took the restraining leash on women of their time and broke it to suit their own personalities. What follows is a quick run-down of four of the sisters paths. The rest as they say, is history. Continue reading

Having thoroughly enjoyed Kathy Griffin’s memoir and having had fun reading Mindy Kaling’s book, you might expect Tina Fey’s book to be the steak at the party of hot dogs. Thus was I drooling a bit when I bit into this famous comedienne’s story. Continue reading

A large book even by my standards- 928 pages in paperback, I’ve finally finished my journey in Russia: Peter the Great. Peter was one of the top three? I’m going to say, most interesting historical figures I’ve ever read about. Believing it was the story of a tyrant, instead I found an utterly dynamic and fascinating individual who can literally be called the forefather of modern Russia. I made that up though so don’t quote it. Continue reading