The Black Moon: A Novel of Cornwall 5: by Winston Graham 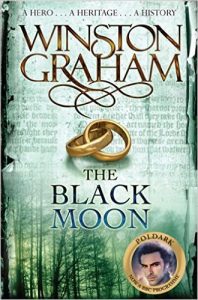 I know I said I was ‘over’ these books, but I’d already ordered this one in the mail and I had nothing else to read…and who am I kidding these are addicting like a soap opera.

Winston Graham took a cruel twenty year break in the writing of the Poldark saga, which is fine by me since when he picked back up that was still twenty or so years before I was even born; there is a brief forward explaining some of his reasons behind this which was interesting. Suddenly he decided he had to know what became of Ross, Demelza after that dismal Christmas evening of 1793 in the sleepy town of Sawle/Grambler in Cornwall when all the gloomy drama of their marriage came to a head at last. Oh, NOW he wants to know? What about all the poor, poor readers left in the lurch? Never mind.

Picking back up straight away the reader enjoys a broadened look into the lives of the main characters, mainly a greater understanding of the personalities of George Warleggan and his wife Elizabeth, Ross’ first love. As new characters go, two of Demelza’s brothers – Sam and Drake – appear on the scene and bring quite a bit of unforeseen change and life into the story.

Also new is Geoffrey Charles: the ten year old young son of Elizabeth Warleggan and Francis Poldark; Ross’ unfortunate cousin of the early novels, and Geoffrey’s governess Morwenna Chynoweth- Elizabeth’s young cousin. Geoffrey Charles and Morwenna form a fast and secret friendship with Drake that has far-reaching consequences, but to begin with is pleasant fun.

The young beloved country doctor Dwight Enys whom we last saw headed off to sea yet finally engaged to Catherine Penenven becomes a casualty of war: shipwrecked and held in a prison camp on the coast of France, and this provides a welcome outlet for Ross’ unquenched, non-conformist wild-child side. As conditions in the camps grow more severe, Ross broods and plans.

These plot lines are as absorbing and rich as any could hope for, and I was starting to believe Graham reformed, until a bit of ugliness near the end that reminds us that life is as always, unfair and therefore sometimes quite unpleasant! The bit of ugliness in question is nothing new, in fact something I’ve read a number of times although never welcome, one of life’s tragedies.

The reason why Graham’s writing makes such an impact is that no matter the scene, the writing is beautiful and measured, the rhythm serene and lulls the reader into false security even though the scene is unpleasant. Then Graham abruptly changes the tone to great dramatic effect: in a few bleak words the end of the scene. The exact same thing happened in book 4 ‘Warleggan’ with the greatly upsetting death of Francis Poldark. (highlight the black bar)

I highly recommend this series, and ‘The Black Moon’ in particular, is only whetting my appetite for more; yet I shudder to think whats in store for the Poldarks and Warleggans after this. I shake my fist at you Winston Graham!

I was born and raised out on the fringes of the rainy Pacific Northwest on fishing boats and cold beaches with only a dog and kittens for company, and so my love of reading and creating stories started very early. My dad would illustrate my early stories and I would listen to him ramble about European history and warfare, eagerly asking questions about Kings, Queens and our own family history. In my adult life I am wife to a brilliant and hilarious web designer and mother to two wonderfully weird children whom I am trying to pass on to my love of learning about the world. I'm an amateur genealogist, amateur photographer and amateur history major haha. I'm good at doing amateur stuff lol. During the last couple years I finally turned my life-long urge to write into a serious endeavor and finished my first novel called (for now) The Stone and the Stars, about a dying dystopian society, and one girl trying to escape it before it collapses. While I finish cleaning up the edges on my novel for the umpteenth time, and before I send it out into the world, I've lately begun a novel about utopia, this time on Earth. I'm finally living up to the nerdy book-worm title my family 'lovingly' pinned on me from the time I was small, and finally doing that one thing I feel like I was born to do. Cliche and silly? Yes!
View all posts by Deanne →
Tagged  Cornwall, Drama, England, Fiction, Mining, Poldark, Romance, The Black Moon, Winston Graham.
Bookmark the permalink.