The Tragedy of the Templars: the Rise and Fall of the Crusader States by Michael Haag 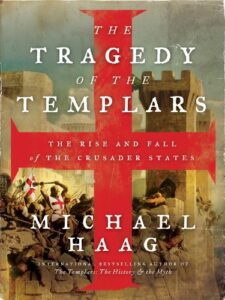 Following my historical fiction primer in my last post “The Land Beyond the Sea” about the Crusades of the late 12th century, I was ready to learn more about the actual city states and fate of Jerusalem after the momentous capture by Saladin’s forces in 1187. 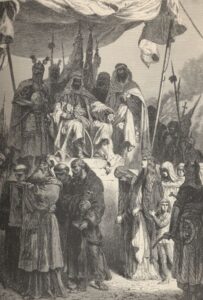 “The Tragedy of the Templars” was for me unwittingly the perfect sequiter to learning about the era, I was incredibly happy at the amount of superficial understanding I was able to take away from this book. You gotta start somewhere, and the period of time between Jesus’ death and the initiation of government-sanctioned, empire-wide Christianity somewhere in the 300s (aka the fourth century) was murky for me. I knew even less of the period of time known as the Dark Ages when Rome fell into decline (in the 400s? see I’ve already forgotten) and barbarians washed over the lands of East Asia and Europe.

Well it wasn’t as ‘dark’ as I’d thought due to lack of education and/or access to reading and medical knowledge; but civilization was under intense and unrelenting threats from hordes of, you name it: Germanic tribes, the Huns, the Turks (destined to be very important to history) the Mongolians, and the Arabians. One of these was not like the other, and that was the Arabians who were destined to found a lasting culture and forever change the religious and social aspects of massive portions of the world down to today.

Let me start from the beginning. Going back to shortly after the death of Jesus, Haag was able to neatly hop, skip, and dance lightly from one to another major points of history – names and dates and happenings – catching you up to speed with just what you need to know each time before neatly helping you connect it to the next important person/place/movement.

This is nearly impossible to do well, might I add, the real chore of the historian and teacher; and I am extremely impressed because as he neatly wove through history to bring you up to the time of the birth of Islam, I didn’t feel like it was dry recital of facts or exhaustive in detail, nor did I feel like too little or too much time was spent. This isn’t for the reader who already knows all of this, it’s a learning bit.

It was a task to be sure to closely pay attention during the early days of Mohammed the Prophet and his successors because a lot of people were very very busy ransacking, proclaiming, gathering followers, capturing strategic places, winning battles, losing, building a religion and capitalizing on parts of it to incite fervor and devotion: and as the author put it, ‘pouring out of the Arabian deserts’ to spring upon the lands of upper Egypt, Palestine, Persia, and what is now Turkey. Some maps will help you out at this point, I bought a big atlas. Here’s a helpful map I found elsewhere on the Googs showing the slim margin of hotly contested property. Originally the Muslims (and Turks but that’s a separate bit of complication) spilled over everything visible in the map. The cities on the coastline during the crusader period of interest tend to be Christian fortresses that could receive goods and reinforcements from sea. 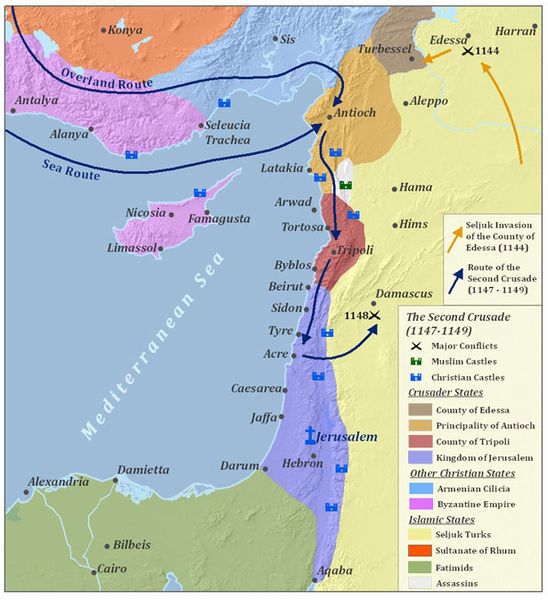 North and South, back and forth we go, trampling the populace and the land

My instinct here is to try to dive in and explain it all to you, dear reader, but it would be better to recommend this book to anyone who is interested in the Middle East, Jerusalem, the fate of the Jews after Jesus’ time, Islam, the rise of Islam and the fracture of it.

Astoundingly- the EXACT same wars over the exact same arguments are going on to this actual day! Everything I didn’t get about the factions and tribes that filled the vacuum after the American war in Iraq of the 2000s, the conflicts started here. Everything I learned extremely briefly this year in January 2020 when America and Iran almost got into it for real- then there was trouble between Iran and Syria when the Kurds were being left unbolstered by allies (obviously this is very surface level description of events and I probably got something wrong) the problems started here.

I literally read a forum after double-checking something about who did what where in the year 1187 and found some commenters arguing back and forth which was the dumber dog/swine over the issue I had just learned about in the book.

I could not believe the issues created by constant war and bloodshed – most specifically the displacement and replacement of the native people of Palestine, and the settlers who came after.
So, some important takeaways about ‘The Tragedy of the Templars”: 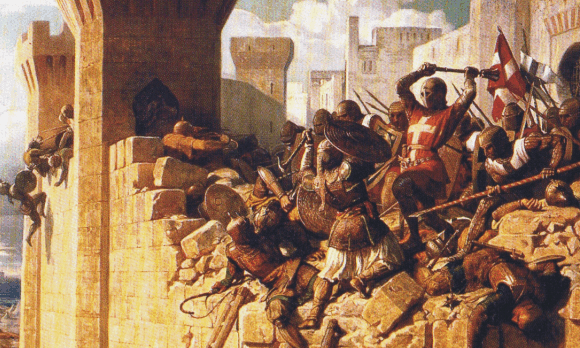 The Templars themselves are a small part of this book, while being the nominal subject, they are the perfect lens in which to examine the Crusades and the clashes between Christianity both in the West and East, and Islam.

The author Michael Haag comes across unbiased presenting fairly the ways the population either prospered or suffered under the rule of different religions, but there was a clear difference between the two and some might feel it favors Christianity, if only for the fact that life was more tolerable living underneath Christian conquerors, rather than Islamic. 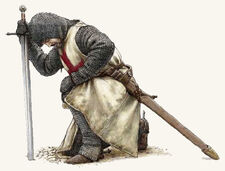 I originally thought to follow this book with one from more of an Asian studies viewpoint- however- certain things factually reported in the book through the exact words of Islamic chronicles dissuaded me. What’s certain is that both sides indulged in much devastation, killing, rape and slavery. The slavery alone is enough to sicken, especially, especially if you are a woman.

You would not BELIEVE how many times Jerusalem has been ruined. Choice of caps and italics are not exaggerated. It is incredibly hard to believe that anyone kept rebuilding that city, except of course that it was Holy to many people, and where there is holiness, money and pilgrims follow. Of course.

By the end of the book I was saturated with the figures of death, and more so the cruel and brutal results to the citizens of ‘insert city here’ to the point of being uninterested at this time in reading more on the subject any time soon. The amount of destruction and human suffering in that one period of a few hundred years is beyond comprehension.
Until the 20th century I’m loathe to think what kind of other similar activities were happening on the globe on this scale. Of note is that Ghengis Khan is covered in this time period as well. It’s the specific wholesale slaughter and cruelty involved that gets you. 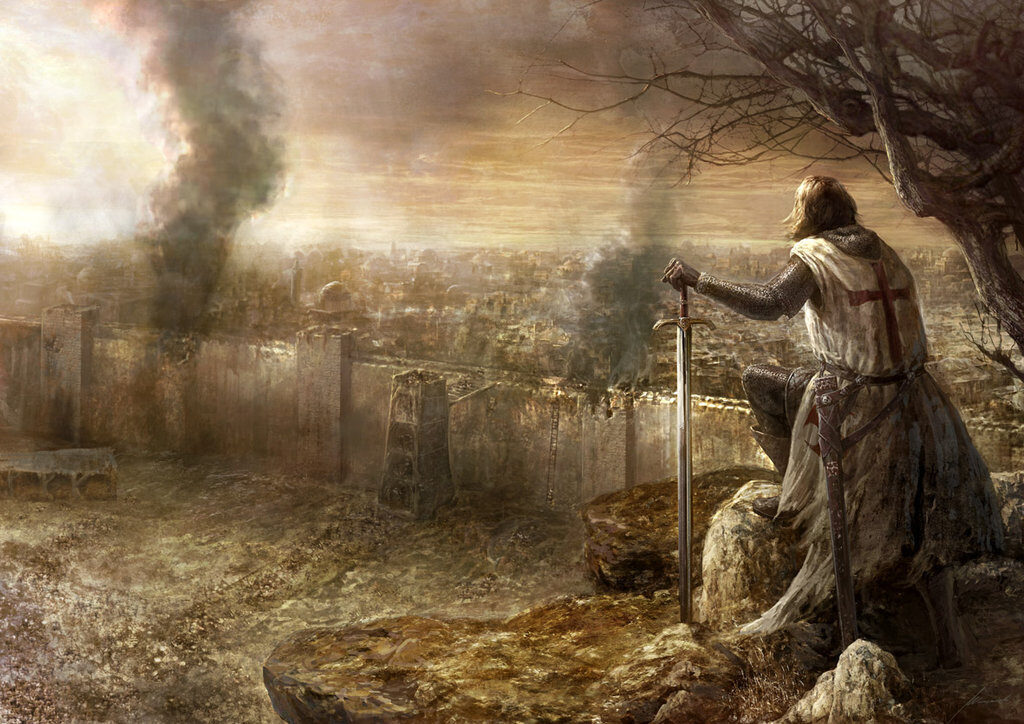 Jerusalem and its holy buildings switch religions yet again- 1187

My only real complaint is that with the end of the Templars, the book abruptly stops. This did not make sense to me because the whole book was a journey, and the road had a dead end. No afterward, no summary of what the Templars stood for in the grand scheme of things on the historical map, no…no neatly worded ending! Annoying.

The actual cause of the downfall of the Templars was a surprise to me; and while I won’t ‘spoil’ that here, of course that it involved two of the deadliest forces of human history: religion and money.

Share the post "The Tragedy of the Templars: the Rise and Fall of the Crusader States by Michael Haag"

I was born and raised out on the fringes of the rainy Pacific Northwest on fishing boats and cold beaches with only a dog and kittens for company, and so my love of reading and creating stories started very early. My dad would illustrate my early stories and I would listen to him ramble about European history and warfare, eagerly asking questions about Kings, Queens and our own family history. In my adult life I am wife to a brilliant and hilarious web designer and mother to two wonderfully weird children whom I am trying to pass on to my love of learning about the world. I'm an amateur genealogist, amateur photographer and amateur history major haha. I'm good at doing amateur stuff lol. During the last couple years I finally turned my life-long urge to write into a serious endeavor and finished my first novel called (for now) The Stone and the Stars, about a dying dystopian society, and one girl trying to escape it before it collapses. While I finish cleaning up the edges on my novel for the umpteenth time, and before I send it out into the world, I've lately begun a novel about utopia, this time on Earth. I'm finally living up to the nerdy book-worm title my family 'lovingly' pinned on me from the time I was small, and finally doing that one thing I feel like I was born to do. Cliche and silly? Yes!
View all posts by Deanne →
Tagged  Christianity, Crusades, Egypt, France, History, Islam, Jerusalem, Jihad, Jordan, Knights, Levant, Michael Haag, Muslim, Outremer, religion, Saladin, Salah a'Din, Syria, Templar Knights, The Tragedy of the Templars.
Bookmark the permalink.