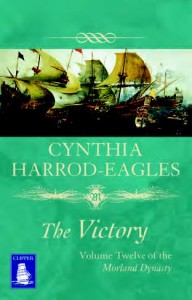 More Napoleonic Era! I thought of grouping at least four of these together, but it simply covers too much personal history in the lives of the Morland family characters. This book really piggybacks onto the one before it, ‘The Emperor’ and much is the same.

Unfortunately for Lucy’s marriage to Chetwyn, she is simply incapable and unwilling to end her affair with Captain Weston, she didn’t bother to hide the fact from her husband that her firstborn son, the heir to the title of Aylesbury is in fact a child of the affair. That does not bode well. Lucy will never give up anything she feels strongly about and soon she informs him that she is pregnant again by Weston. This child Chetwyn feels is beyond his power to recognize and claim as his own, and the boy Thomas is sent to Heloise to be raised.

Rebuffed at every turn Chetwyn sinks further and further into unhappiness until tragedy finally overtakes him.

Heloise lives in the country not far from Morland Place which is a terrible idea because it keeps James’ mind on her constantly, and the man is entirely useless. Not only is he incapable of showing his wife Mary Ann the love she desperately needs but hides behind her cold exterior; but he doesn’t love his son by her at all, instead becoming unnaturally devoted to their first child, a daughter called Fanny, to the degree that the kid is an incredible brat. That happens when a child sees how to manipulate before it can even talk.

This drives Mary Ann more and more to take her son and spend time in Manchester, a filthy depressing place of mills machinery and desperate poverty and misery. To her surprise, Mary Ann finds herself drawn to help the very sick and weak, and futilely tries to convince her powerful father that the revolting condition the humans are living in are a threat to all, even as cholera rages unchecked through the city.

This chain of events leads to a culmination of tragedy, with a bit of a bright spot at the end that as a reader you aren’t entirely sure the characters involved very well deserve.

The book is simply chock-full of naval matters, far worse than the one before it, and I had quite a time forcing myself to not skim it. The famous battle of Trafalgar is included in great detail, but Lucy back at home eating up all the news and talking like she knows as much as an Admiral is really off-putting. I really hope this book is a dark before the dawn type of story, but something tells me things can still get worse.

I was born and raised out on the fringes of the rainy Pacific Northwest on fishing boats and cold beaches with only a dog and kittens for company, and so my love of reading and creating stories started very early. My dad would illustrate my early stories and I would listen to him ramble about European history and warfare, eagerly asking questions about Kings, Queens and our own family history. In my adult life I am wife to a brilliant and hilarious web designer and mother to two wonderfully weird children whom I am trying to pass on to my love of learning about the world. I'm an amateur genealogist, amateur photographer and amateur history major haha. I'm good at doing amateur stuff lol. During the last couple years I finally turned my life-long urge to write into a serious endeavor and finished my first novel called (for now) The Stone and the Stars, about a dying dystopian society, and one girl trying to escape it before it collapses. While I finish cleaning up the edges on my novel for the umpteenth time, and before I send it out into the world, I've lately begun a novel about utopia, this time on Earth. I'm finally living up to the nerdy book-worm title my family 'lovingly' pinned on me from the time I was small, and finally doing that one thing I feel like I was born to do. Cliche and silly? Yes!
View all posts by Deanne →
Tagged  Cynthia Harrod-Eagles, Napoleonic Era, Napoleonic Wars, The Victory, Trafalgar.
Bookmark the permalink.