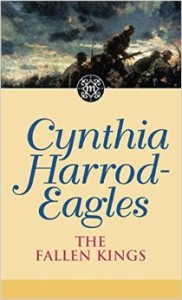 I realized what I was in for at the end of the last book and WWI was still not over, but the end is in sight, and I found myself urging America to hurry up and join the war, since of course we know from history, their numbers turned the tide for the Allies against Germany’s forces.

This was another rough book, I know more about the individual ebb and flow of the battles of the Great War than I ever did before. I’ve read several historical-fiction books by other authors taking place during the war now, and I’ve pieced together a decent understanding of what went wrong, how it went down, and how it set the stage for WWII. Well now I have a better grasp of the emotional terror and weariness, the solitude and solidarity of all the men who died at the Front and all the men and women who waited at home. It’s been pretty gut-wrenching emotionally since as ever, Harrod-Eagles does not pull any punches with her characters and no one is safe.

Bertie and Jessie, estranged in love since who knows how many books back, since Jessie was a child during the Boer war in South Africa actually! Finally come together through circumstance, but still sets the stage for guilt and a difficult future ahead for both.

Emma, the bright and gregarious orphan who has been flitting around between Scotland, Morland Place, and her cousin Violet’s house in London is scorched by the war. To do something, anything, to take her mind off of it, Emma goes to France joining the FANY’s, women who were irreplaceable in the war driving ambulances right up to the front to take care of wounded men.

True to the title ‘The Fallen Kings’ time and inevitable history catches up with the Romanov family at last, and I was interested to see that many people believed the women were safe and in hiding for many years. It never fails to upset me how the world let the Romanov family down. No one wanted to have such a politically worrisome family in the borders of their country, not even the king of England, Nicholas’ own first cousin. The wheels of bureaucracy turn slow, and lives are lost in the meantime.

If nothing else, this book brings home the realness and terribleness that was called The Great War, for truly nothing in the entire history of mankind had prepared humans for it. It’s with a sense of unease that I move forward in the series, knowing these families who gave and sacrificed and suffered so much will face it again in twenty years. Phoo.

I was born and raised out on the fringes of the rainy Pacific Northwest on fishing boats and cold beaches with only a dog and kittens for company, and so my love of reading and creating stories started very early. My dad would illustrate my early stories and I would listen to him ramble about European history and warfare, eagerly asking questions about Kings, Queens and our own family history. In my adult life I am wife to a brilliant and hilarious web designer and mother to two wonderfully weird children whom I am trying to pass on to my love of learning about the world. I'm an amateur genealogist, amateur photographer and amateur history major haha. I'm good at doing amateur stuff lol. During the last couple years I finally turned my life-long urge to write into a serious endeavor and finished my first novel called (for now) The Stone and the Stars, about a dying dystopian society, and one girl trying to escape it before it collapses. While I finish cleaning up the edges on my novel for the umpteenth time, and before I send it out into the world, I've lately begun a novel about utopia, this time on Earth. I'm finally living up to the nerdy book-worm title my family 'lovingly' pinned on me from the time I was small, and finally doing that one thing I feel like I was born to do. Cliche and silly? Yes!
View all posts by Deanne →
Tagged  Cynthia Harrod-Eagles, Historical Fiction, The Fallen Kings, The Great War, The Morland Saga, WWI.
Bookmark the permalink.