The Art of Hearing Heartbeats: by Jan-Philipp Sendker 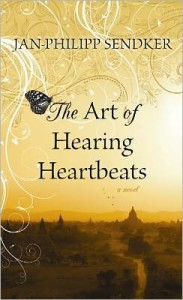 In present-day New York, Julia’s father suddenly disappears, but doesn’t bother to hide his tracks which lead to Burma; the country he came from in 1942. She finds a note from the 1960’s he wrote referencing a woman he left behind, and her cold high-fashion mother indicates that Julia’s father left the family emotionally decades ago. Julia decides on a whim she must know why her father left and books herself a ticket.

The rest of the story is a look into the past, and a homecoming of sorts for Julia. From the very start the voice of the story was a bit strange for me, and Julia an obviously modern spoiled brat who really doesn’t make sense to me. When she finds the note from her father her first impulse is to burn it over the stove before reading it, even though the entire drive behind this book is to find him, so that’s a strange impulse. Then she balls her eyes out, but upon arriving in Burma reflects that she hasn’t even cried over this whole thing. The man she meets in a crappy little shop in Burma knows her and begins to tell her the story. Intermittently in the story we pop back to the present and observe Julia being a fairly unlikable brat who really dislikes this whole third world thing.

The good news is that the book is mostly set into the past and from the moment we start reading about her father Tin Win and the mother who abandoned him, how he lost his sight and the wonderfully intricate world he built for himself afterward, all those doubts fade away and the story is absorbing, all the characters interesting and you don’t want the story to end. That is a very good thing for a novel to have! The village life of the native people of Burma (I don’t know why the name Myanmar is never used not even in the present) is well-built and the colors and personalities really come to life. 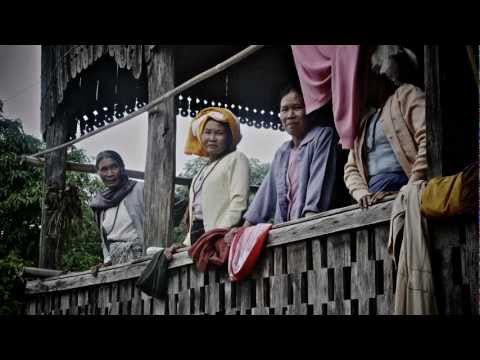 I would say the end is satisfying, it’s just that Julia herself who forms the backbone of the entire thing, the ‘why’ and the ‘what’ is an unfortunately formed character. I did puzzle over a German man writing from the perspective of an Upper East Side young woman and a father with an Indonesian past, so perhaps that is where some of the uneven parts come from, but overall Sendker is a deft storyteller and I’m looking forward to reading his other works.

I was born and raised out on the fringes of the rainy Pacific Northwest on fishing boats and cold beaches with only a dog and kittens for company, and so my love of reading and creating stories started very early. My dad would illustrate my early stories and I would listen to him ramble about European history and warfare, eagerly asking questions about Kings, Queens and our own family history. In my adult life I am wife to a brilliant and hilarious web designer and mother to two wonderfully weird children whom I am trying to pass on to my love of learning about the world. I'm an amateur genealogist, amateur photographer and amateur history major haha. I'm good at doing amateur stuff lol. During the last couple years I finally turned my life-long urge to write into a serious endeavor and finished my first novel called (for now) The Stone and the Stars, about a dying dystopian society, and one girl trying to escape it before it collapses. While I finish cleaning up the edges on my novel for the umpteenth time, and before I send it out into the world, I've lately begun a novel about utopia, this time on Earth. I'm finally living up to the nerdy book-worm title my family 'lovingly' pinned on me from the time I was small, and finally doing that one thing I feel like I was born to do. Cliche and silly? Yes!
View all posts by Deanne →
Tagged  Burma, Fiction, Indonesia, Jan-Philipp Sendker, Myanmar, The Art of Hearing Heartbeats.
Bookmark the permalink.