The Son and Heir: a Memoir by Alexander Munninghoff 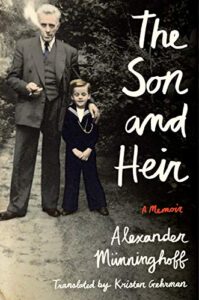 “The Son and Heir” tells the story of a man whose not-uncommon fractious relationship with his father led to the very uncommon step of joining Hitler’s army, becoming an SS officer who fought on the Russian front. The author, Alexander Munninghoff was a small boy unaware of the meaning of such things until he was much older. All he knew when he was little was that Grandpa was mega-rich, and there were certain advantages to being the heir to such a guy! That made me chuckle when I read that.

“The Son and Heir” is not really a memoir at all but a story of his father Frans who hid his past and his feelings in anger and estrangement. A man who disagreed so vehemently with everything his Dutch father ordered him to do during his extremely privileged youth in Lithuania, that he went far, far the other way to identify with his German heritage just at the period in time when being really nationalistic in Germany made you the bad guy. Munninghoff relates in great detail the path that led Frans from rich boy to seasoned warrior, his time at school, his simmering tensions and resentment within his family circle and his relationships.

Frans ended up spending quite a few brutal years in the army at the Russian front, also known as the Eastern front and earned the Iron Eagle in what must have been horrific circumstances. This was no shooting at remote figures kind of soldier, he was up close in hand to hand combat at the minimum, witnessed mass murder of Russian prisoners and killed many himself in actual combat.

Frans may have been an SS officer, but for him the war was against the Bolsheviks, against the people who had acted against the Russian identity he also inherited, and against capitalism. Like many who must have felt this way, he was always affected by this throughout the rest of his life. One thing that happens when you lose a war is that your experiences and thus who you are and what you did is invalidated.

How could he ever relate to the world going forward after WWII when he had been a Nazi? This was not really explored but I did find that very interesting because this must have been the truth of many soldier’s lives, that they were not involved with the Jews but found out afterwards or close to the end of the war, that they were the bad guys. They’d known Hitler a joke as a German, the way he talked for instance was widely made fun of, but it was too late when they found out his real intentions, so they assured each other.

Frans’ Dear Old Dad, the ‘Old Boss’ (grandpa to the author) was a majorly successful war profiteer and possible, unproven, war criminal -whose charitable contributions ensured his survival- of Dutch nationality, who despite violently disagreeing with his Nazi son, protected him and tried unsuccessfully to send him to Argentina to avoid prosecution in the Netherlands (Frans didn’t want Dad’s help even if it meant prison) and even though the Old Boss also violently disagreed with the wife his son chose (then abandoned after the war), feeling she was low class and unworthy; he protected, cared for, and…kidnapped! his grandchild to raise as his heir. What a twisted sour and interesting heritage Alexander Munninghoff was innocently in possession of.

The author himself recounts few memories as a child, how he felt the tension when his father was around, how the old man would roar and rage at anyone who did not obey; even his scant memories of his mother who loved him very much and who tried to run away with him to safety in another country. Safety unfortunately meant stark poverty and when his grandfather kidnapped him – through truly diabolical means – as a young child he gradually forgot his mother and accepted his life as is.

Years and years later after hearing and scorning his father’s war stories, he became a famous journalist and tracked down in as much detail as possible, the real story of how his father came to be a Nazi and the overbearing role his grandfather, and docile roles his grandmother and aunts and uncles played in the altogether incredibly dramatic story of his family.

Honestly the whole story is crazy. I really enjoyed the parts that were from Munninghoff himself’s point of view, they were humorous and vivid; by necessity the relating of his families history is pretty dry. The events and characters stand on their own due to the sheer volume of variety and daring deeds done in wartime. As a netflix fictional show perhaps, or a documentary translated from Dutch into English maybe this could be really interesting but as is, is lacking a whole lot of zest or any kind of satisfying conclusion.

As a personal family history, well this guy wins the contest of ‘most interesting’ ‘most unlikely but really happened’. While his own life seems to have been fairly standard, I would have liked to have heard about it.

It remains interesting and humbling what our own ancestors may have given and sacrificed even unknown to us so that we could have the humdrum lives of stability and normality most of us have.
I do recommend this book as it must be a very rare look into what made one man a Nazi, but as real life so often is, the actions of real people and lack of closure in many aspects can leave you disappointed.

I was born and raised out on the fringes of the rainy Pacific Northwest on fishing boats and cold beaches with only a dog and kittens for company, and so my love of reading and creating stories started very early. My dad would illustrate my early stories and I would listen to him ramble about European history and warfare, eagerly asking questions about Kings, Queens and our own family history. In my adult life I am wife to a brilliant and hilarious web designer and mother to two wonderfully weird children whom I am trying to pass on to my love of learning about the world. I'm an amateur genealogist, amateur photographer and amateur history major haha. I'm good at doing amateur stuff lol. During the last couple years I finally turned my life-long urge to write into a serious endeavor and finished my first novel called (for now) The Stone and the Stars, about a dying dystopian society, and one girl trying to escape it before it collapses. While I finish cleaning up the edges on my novel for the umpteenth time, and before I send it out into the world, I've lately begun a novel about utopia, this time on Earth. I'm finally living up to the nerdy book-worm title my family 'lovingly' pinned on me from the time I was small, and finally doing that one thing I feel like I was born to do. Cliche and silly? Yes!
View all posts by Deanne →
Tagged  Alexander Munninghoff, biography, Lithuania, Memoir, Nazi, Nazi Germany, Netherlands, Russia, The Son and Heir, WWII.
Bookmark the permalink.