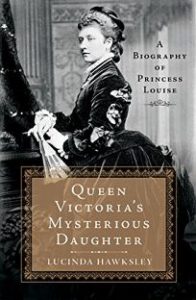 Queen Victoria: the maternal dragon who gave name to the Victorian era had eight children and was none too fond of any particular one. In fact to one degree or another she managed to emotionally cripple each one well into adulthood.

The child who may have given her the most trouble was Louise. Princess Louise, Victoria and Albert’s fourth daughter, was born with a will to live her life as she chose not as her parents chose. To this day many of the Royal Archive and other files on the Princess have been sealed, secret. What about Louise could be so dangerous to public knowledge? 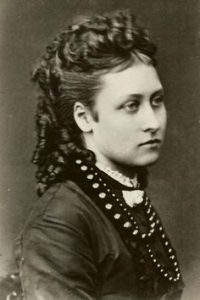 A bit of background: I read about Louise’s youngest Beatrice last year and took away an overwhelming irritation for the Queen Mother. Mostly we learn about how Victoria was loved, less about her smothering, stifling, critical and obtuse qualities. Victoria kept her youngest daughter by her side for her entire lifetime, panicking at the thought of her children growing up and having a life of their own. As far as I can tell, Queen Victoria’s ultimate goal was to keep all her children close to her for comfort in her long bereavement, and to have all surrounding her mourn as deeply as she insisted on doing, for decades after her widowhood.

It was an age of severe restrictions for children, they were meant to be perfect models of obedience without displaying any kind of individuality that did not suit the parents. For Princess Louise, this led to a lifetime of looking for acceptance and attention while indulging her artistic and naturally candid and warm temperament, to the shock and dismay of many; and to the delight of many more. 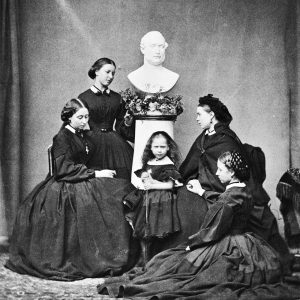 Queen Victoria’s five daughters in mourning, next to a bust of their father, 1862

The author made an extensive and thorough search into all available records and memories of Louise and has here produced a competent account of Louise’s lifetime and a fairly clear picture of the Princess’ personality. Ultimately, there doesn’t seem to be any mystery. Partly because so many records are sealed or have been removed, and partly because the ‘shocking’ truths amount to Louise’s affairs and I’m not sure much else.

The Princess herself seems to have been a great lady however, worthy of being remembered. Louise was warm-hearted, incredibly open and accessible to the common people. She was vivacious and a incorrigible flirt who charmed men and children everywhere, but not always their mothers and wives. Louise was truly tireless in her support of women’s rights, children’s welfare and multitudes of similar charities down til her death at 91. She had no children, and remained healthy and vigorous into old age. 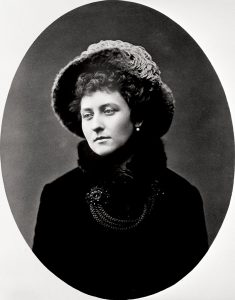 Louise was a patron of the arts, as well as a champion for women’s rights and charities for children.

‘A Biography of Princess Louise’ is clearly written; neither boring nor heavy-handed, but it isn’t very exciting or especially fascinating either. The most avid readers of Victorian era biographies or insight into Queen Victoria will enjoy this, otherwise it seems to only serve as a timeline of Louise’s life; and as one of the earliest royal rebels, is well deserved. On a last note, if Hawksley ever finds out what is contained in those forbidden records, I expect a revising of this novel would be very interesting.

This is an interesting post I found that contains short biographies on their children:

I was born and raised out on the fringes of the rainy Pacific Northwest on fishing boats and cold beaches with only a dog and kittens for company, and so my love of reading and creating stories started very early. My dad would illustrate my early stories and I would listen to him ramble about European history and warfare, eagerly asking questions about Kings, Queens and our own family history. In my adult life I am wife to a brilliant and hilarious web designer and mother to two wonderfully weird children whom I am trying to pass on to my love of learning about the world. I'm an amateur genealogist, amateur photographer and amateur history major haha. I'm good at doing amateur stuff lol. During the last couple years I finally turned my life-long urge to write into a serious endeavor and finished my first novel called (for now) The Stone and the Stars, about a dying dystopian society, and one girl trying to escape it before it collapses. While I finish cleaning up the edges on my novel for the umpteenth time, and before I send it out into the world, I've lately begun a novel about utopia, this time on Earth. I'm finally living up to the nerdy book-worm title my family 'lovingly' pinned on me from the time I was small, and finally doing that one thing I feel like I was born to do. Cliche and silly? Yes!
View all posts by Deanne →
Tagged  19th century Britain, A Biography of a Princess, biographies, biography, Britain, England, History, Louise, Lucinda Hawksley, Princess, Princess Louise, Queen Victoria, Royals, UK, Victorian Era.
Bookmark the permalink.