Out of Egypt: by André Aciman 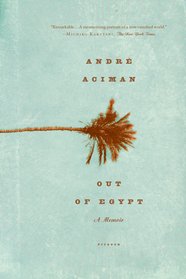 Egypt in another world, Alexandria in a time that will never come again. André Aciman lays down an intricate web that covers four generations of a family that truly belongs nowhere, and struggles for identity as cultural and racial worlds collide. The term Jewish diaspora simply means the scattering of the Jews from their homeland to the ends of the earth, never being allowed to call a place their own.

Aciman brings this feeling to life through his large colorful family and his recollections of a time in his youth raised in the hot Arab city filled with Greeks, Italians, French, and Jews alongside each other. His family were Sephardic Jews who wandered from Italy to Turkey before settling in Egypt for several decades, but even that was doomed to end as they scattered to France and England, Aciman to America; as the theme is brought home more than once that nothing lasts. As Aciman’s aunt Flora says, “Jews lose everything at least twice in their life.” 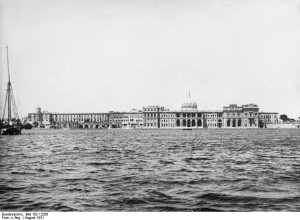 Alexandria in the 1930’s, facing the Palace.

André weaves a complex tapestry that at times is really hard to follow. His many many great-aunts and uncles and four grandparents are rarely spoken of by name, even when the grandfather in question changes in the next paragraph, or the two grandmothers are speaking to one another you read ‘my grandmother’ and have to figure which is which. As a result even near the end of the book I was trying to repeat whose mother was whose in my head to understand the current scene. I really could have used a family tree in the beginning. Aciman moves from chapter to chapter in his life with little connection between them, just moving forward in time to the next act, leaving me to wonder each section if this is the part of the book that ‘is the point’ but that’s not how this story works.

What it is about is the through-thick-and-thin bonds of his family despite the quarreling and amusing hijinks, the accusations and the laughter, most of all the blackout times during the war when they huddled together all generations in the same apartment with low candles, trying to get along, sharing food and swapping stories. You can feel the heat and taste the hot Arab delicacies his family would have called ‘street food’ if they knew young André was partaking, the hot sun and the endless beaches, his aunts and grandmothers gossiping in the shade while being served cool tea, the smell of cucumber and the clink of backgammon chips; his ever-present panicked feeling that it would come to an end at any time and they would be helpless to stop it. 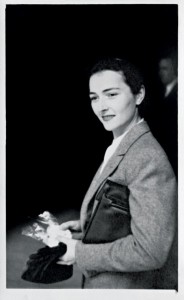 Aciman’s beautiful deaf mother who had a large and lasting impact on his life.

In the end, their fears came true and the family left Alexandria forever, but for a kid who seemed hopeless in school, André Aciman is a wonderful storyteller. I still wasn’t blown away by the book, and the amount of confusion in the narrative took two shiny kitten stickers away, but I would read more by Aciman without hesitation. If you brave the complex weave of characters, I doubt you’ll be sorry.

I was born and raised out on the fringes of the rainy Pacific Northwest on fishing boats and cold beaches with only a dog and kittens for company, and so my love of reading and creating stories started very early. My dad would illustrate my early stories and I would listen to him ramble about European history and warfare, eagerly asking questions about Kings, Queens and our own family history. In my adult life I am wife to a brilliant and hilarious web designer and mother to two wonderfully weird children whom I am trying to pass on to my love of learning about the world. I'm an amateur genealogist, amateur photographer and amateur history major haha. I'm good at doing amateur stuff lol. During the last couple years I finally turned my life-long urge to write into a serious endeavor and finished my first novel called (for now) The Stone and the Stars, about a dying dystopian society, and one girl trying to escape it before it collapses. While I finish cleaning up the edges on my novel for the umpteenth time, and before I send it out into the world, I've lately begun a novel about utopia, this time on Earth. I'm finally living up to the nerdy book-worm title my family 'lovingly' pinned on me from the time I was small, and finally doing that one thing I feel like I was born to do. Cliche and silly? Yes!
View all posts by Deanne →
Tagged  Alexandria, André Aciman, Diaspora, Egypt, Jewish, memoirs, Out of Egypt.
Bookmark the permalink.