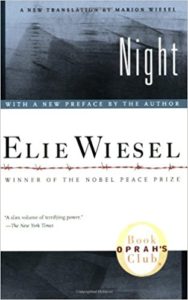 Wherein I climb a soapbox and try to sort out my feelings and ramble a bit; and if you understandably do not want to read it, skip to /endrant/

I left this book on a to-read pile for a long time, fearing the ‘feels’ I knew that come along with any Holocaust-set memoir, but was I glad that I read it after all? I’m a little torn but I would say no, with the caveat that I’ve read several such memoirs before like the one about the little girl in the red coat (featured in Schindler’s List) who was a real person, The Diary of Anne Frank, Number the Stars, as well as several non-fiction books that touch on WWII. Anyone who has seen the movie Schindler’s List even edited on television has probably had their fill of the sadness involved. We watched it in AP History and no one who has seen it has ever forgotten it, I’m sure.

The question that remains after reading such things seemingly is not the easily answered yes or no if what happened to the Jews was evil or not; or that it’s a fact that the Holocaust remains one of the very few worst atrocities in humankind’s history or not; but that as humans we keep asking why did this happen. Why this, why that, we keep searching for the answers to how any human being could have done what the Nazi party did. I suppose that’s why we keep learning and reading about slavery also, but I suspect we will never find the answers because it’s all too obvious that given a large enough pool of people, humans can and will find the capability in their heart to treat another person in the cruelest sub-human way imaginable.

The argument for continuing to publish or read such stories is the extremely short generational memory people have. The Civil War was fifty years before my grandfather was born, WWI five years, WWII twenty years after. I don’t want to list out the other soul-crushing things that have happened in the interim but I imagine we could list Chairman Mao suffocating his people, Lenin and Stalin crushing millions, straight up to today as we live each day in relative safety while children and civilians are murdered in Syria.

So. Book spoilers ahead on this one: Night takes us through the unimaginable experience that there are no true words for to describe clearly; of a young man and his father who were taken to the most extreme of the concentration camps by the Nazis. He did not know it at the time, but when his sister and mother were told to ‘go right’ instead of left, within days the ash constantly rising from great towers included their remains. He witnessed live babies being thrown into fire, but understandable tried to block this from reality in his memory. The worst of it was the hunger. With the hunger that leaves a person as brittle as a winter branch and looking like a mockery of a human, the prisoner lost hope. Was it more of a hidden blessing then that  the hunger took away caring if they lived or died?

In his final days at the camp, Elie was assigned to work inside the tower, that meant being in constant contact with the dead, and disposing of them into the furnaces. The job that meant you yourself are losing the ability to be useful and would soon be alongside your fallen brethren. Sadly, only days before being liberated by the Allied armies, his father passed away. Elie told his story by writing this book not long after, but the world was not interested in hearing it, it seems it’s only picked up steam lately.

Saddest of all, most painful perhaps, he lost his strong faith in God which had been a driving force in his life, due to the monstrous crimes of other human beings. When he learned that the rest of the world did indeed know what was happening and did not stop it, it broke him entirely. Of course it wasn’t as easy as popping into the heart of Germany to stop it, but where was the exposure, where was the outrage?

Today we try to give weight to the suffering of those people, we may forgive (if only to live a life free from hate) but we should never forget. The greatest crime a person can commit today in regards what Hitler did is to deny it or to minimize it. The story was not explicit, but sometimes straight honest words cut deeper. If you read this book you put yourself in the path of great human suffering, and whether or not you have a personal satisfying answer for why, the pain will stay with you.

I was born and raised out on the fringes of the rainy Pacific Northwest on fishing boats and cold beaches with only a dog and kittens for company, and so my love of reading and creating stories started very early. My dad would illustrate my early stories and I would listen to him ramble about European history and warfare, eagerly asking questions about Kings, Queens and our own family history. In my adult life I am wife to a brilliant and hilarious web designer and mother to two wonderfully weird children whom I am trying to pass on to my love of learning about the world. I'm an amateur genealogist, amateur photographer and amateur history major haha. I'm good at doing amateur stuff lol. During the last couple years I finally turned my life-long urge to write into a serious endeavor and finished my first novel called (for now) The Stone and the Stars, about a dying dystopian society, and one girl trying to escape it before it collapses. While I finish cleaning up the edges on my novel for the umpteenth time, and before I send it out into the world, I've lately begun a novel about utopia, this time on Earth. I'm finally living up to the nerdy book-worm title my family 'lovingly' pinned on me from the time I was small, and finally doing that one thing I feel like I was born to do. Cliche and silly? Yes!
View all posts by Deanne →
Tagged  Elie Wiesel, Holocaust, Night.
Bookmark the permalink.