Empress of Fashion: A Life of Diana Vreeland by Amanda Mackenzie Stuart 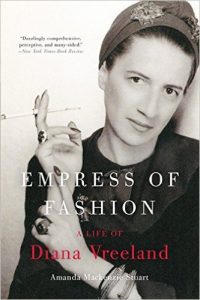 Diana Vreeland: the original Dragon Lady, fashion trendsetter, jet-setting socialite and notorious eccentric. Once called ‘a beacon of fashion for the twentieth century’, Diana Vreeland set her own boundaries on life, and lived it to the full. Born in 1903, she was a curious creature who helmed Harper’s Bazaar for over 30 years and American Vogue for less than ten, yet made waves that ripple to this very day. She went on to make the Costume Exhibit at the Metropolitan Museum of Art the success it is today and paved the way for many successful modern designers.

I was surprised to find hardly anything full-length written about Diana. She seems to have evoked a different reaction and opinion from nearly everyone, from full-out admiration to pure hatred. A force to be reckoned with sure, but also a woman who had seen fashion change from the sparkling, swinging 20s (when she herself was in her twenties) to the more no-nonsense fabric rationed choices of women in the war period of the 40s and 50s; the changing attitudes of the world in the 60s and 70s, and the working woman shift that took place in the 1980s. 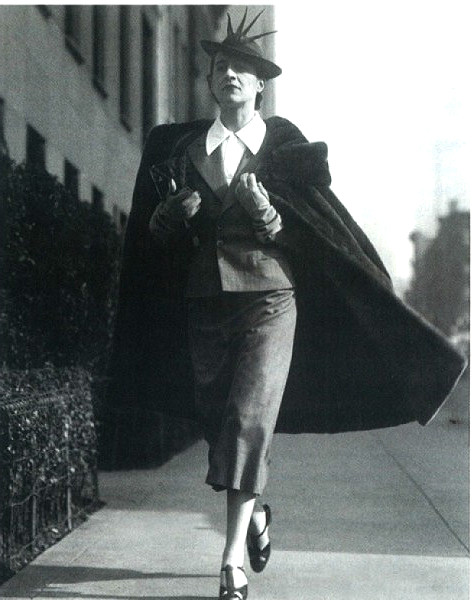 This picture really says it all. The most iconic picture of Diana, and the hardest to find.

Really, it’s impossible for me to do this woman any kind of justice by describing her but I’ll give it a shot. I went into reading this book expecting a hateful figure, a distant sort of high fashion snob of the highest degree. A ‘fun to hate’ story. Instead I found a very individualistic person who took hold of her own destiny, the power of her dreams and forced them to become her reality. Diana saw the world very differently from most people. She seems to have lived and breathed her own (at times tunnel-visioned) imaginative form of creativity, of colors, of possibilities. She was always ‘looking for something she hadn’t seen before’, and when she saw it, she pounced. She is famous for having said as a fashion editor, “Give them what they never knew they wanted,” and “too much good taste is boring.”

Boring, Diana was not. She pushed the boundaries of fashion and honestly, the very fabric of society has hinged sometimes upon what women have worn all through the 20th century. It’s almost surreal to realize that the decisions made highest up trickle down into production all the way to the bottom, to the every day you and me, and influence what people believe is their ‘natural’ taste or style. Today of course in 2016, the freedom to express who you are through clothing is something we take for granted, but once upon a time, women were told what was and was not acceptable and people like Diana pushed against the constraints. 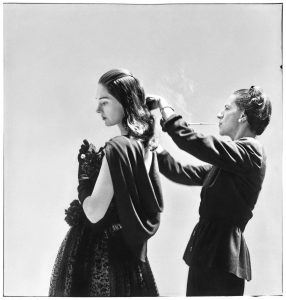 She believed in dreams, and that dreams could make the person. That you can create your own reality, and part of doing that is taking literal control starting with what you wear. Diana also contested the typical ideals of American beauty, introducing some of the first rhetoric ever heard that the face you are born with is not a stumbling block to being the best YOU. Having grown up being told and fully believing that she was ugly, Diana used her power later on as fashion editor of the world’s most highly circulated fashion magazine to feature girls with interesting faces, such as Barbara Streisand, who famously refused to have a nose job.

Diana believed that we are each the ‘editor’ of our own lives, and that independence for women was only as limited as the imagination. All of this is normal now, but at the highest echelons of fashion and society as she was, they were ground-breaking ideas. 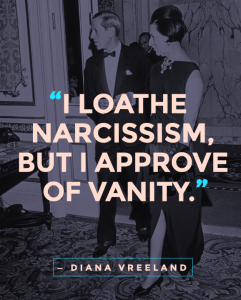 Here, I entirely agree. She was very quotable.

For awhile I was only mildly interested in the book, it’s well written and fair-minded towards its unruly subject; but it was towards the end that I really began to develop an admiration for this woman who passed away when I was seven years old, in 1989. I found myself unexpectedly inspired by her words too. Fashion is a synonym for silly sometimes, but there’s real thought behind the idea that it’s much more than just clothes. It’s how we present ourselves to the world, the power we want to display, the bridge between us and the literal world. 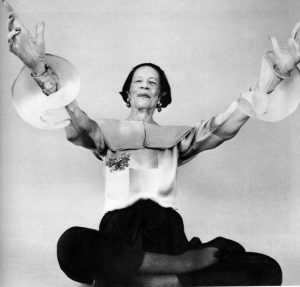 This is already a long post, and I’m barely doing her full story justice, only focusing on her character: but if I’ve interested you in any way in the world and life of Diana Vreeland, than this is the authoritative book that I’d recommend. Stuart is insightful and fair in sorting out Diana’s character, and in terms of difficulty I imagine it was quite a bit. Diana was a larger than life character not bothered by quibbles like ‘total truths’ in fact she made things up all the time. She was the most interesting person I’ve learned of in quite some time. Maybe we can’t all be Diana Vreeland (nor would want to be) but we can all take away pieces of advice from her. 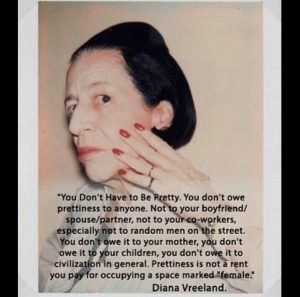 I was born and raised out on the fringes of the rainy Pacific Northwest on fishing boats and cold beaches with only a dog and kittens for company, and so my love of reading and creating stories started very early. My dad would illustrate my early stories and I would listen to him ramble about European history and warfare, eagerly asking questions about Kings, Queens and our own family history. In my adult life I am wife to a brilliant and hilarious web designer and mother to two wonderfully weird children whom I am trying to pass on to my love of learning about the world. I'm an amateur genealogist, amateur photographer and amateur history major haha. I'm good at doing amateur stuff lol. During the last couple years I finally turned my life-long urge to write into a serious endeavor and finished my first novel called (for now) The Stone and the Stars, about a dying dystopian society, and one girl trying to escape it before it collapses. While I finish cleaning up the edges on my novel for the umpteenth time, and before I send it out into the world, I've lately begun a novel about utopia, this time on Earth. I'm finally living up to the nerdy book-worm title my family 'lovingly' pinned on me from the time I was small, and finally doing that one thing I feel like I was born to do. Cliche and silly? Yes!
View all posts by Deanne →
Tagged  20s, 30s, 40s, 50s, 60s, 70s, 80s, Amanda Mackenzie Stuart, biography, Costume, Costume Exhibit, Diana Vreeland, Fashion, Harper's Bazaar, History, London, Met, Metropolitan Museum of Art, New York, Non-fiction, Paris, personalities, socialite, The Empress of Fashion, Vogue.
Bookmark the permalink.