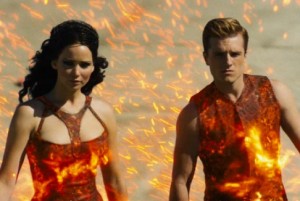 At what cost comes freedom? If you are promised redemption from fear and hunger can it really change who you are? Katniss finds herself facing this very question from the moment book two of The Hunger Games series picks up, as she heads home to District 12. They are victors, heroes, celebrities, but Katniss does not feel relief- far from it.
If it were up to her, she would try to forget the Games entirely and never speak of them, and no wonder, but the Capitol as the book says, has a way of keeping the horror fresh and immediate. The two victors have won in a way that no one has ever won in the history of the Hunger Games, and the anger of the President of the Capitol is more real and palpable than Katniss realizes.

Katniss and Peeta are compelled to do a ‘Victory Tour’ which visits each of the Districts where children have been lost, to participate in meaningless ceremonies and dinners celebrating the win. Katniss looks into the faces of cheering crowds who “secretly loathe” her and an anger that has been kindling a long time begins to build in her. What Katniss does not know, and President Snow does, is that this anger has kindled in the hearts of the Districts also. The act of defiance and desperation which enabled Katniss to win the Games and save Peeta’s life has struck a chord with the people and she is an unwitting symbol for them.

The Capitol is prepared for this. It is the year for the seventy-fifth Hunger Games, which also makes it a ‘Quarter Quell’, a particularly ghastly twist on the usual games, celebrated every 25 years. It’s a double whammy and the prime moment for this society to totter on the brink of change, or be forever subdued. Katniss and Peeta don’t realize it yet, but what was the most vividly profoundly disturbing event in their young lives, the Hunger Games they just came from was just the precursor to what is next.

If possible, the writing is even more superb than the first book. You fall so deeply into the character of Katniss, thinking her every thought; seeing everything she sees, that the deep irony and cruelty in her environment sting to the core. I found this book even more compelling and deeply disturbing than the first, in some ways because the world and characters expand even greater. Many people talk about Katniss’ confusing relationships with Peeta and Gale and except for when you want to thump Katniss on the head for being thick, you really feel her struggle. In particular I appreciate the relationship between Katniss and her drunken, bitter old mentor Haymitch Abernathy. It’s one of humor, sour acceptance, and growth for both of them.

The author, Suzanne Collins lets the story grow and play out without rushing anything, and as always there is plenty of wry humor to balance the mood of the book. The characters interact often in a humorous or touching way, she develops each scene with minimal detail and yet it feels so easily real. This more than anything else I felt, made the story authentic. This is the real rare talent I think Suzanne Collins has that immerse people in her stories. The anticipation grows and does not disappoint with Catching Fire, but fans heading on to the third book may feel less excited to see what happens next, but more doggedly determined to see Katniss through this journey.

Note 06/18/2018: I did in fact read the third book- right after reading the second as a matter of fact; but I was so bummed out and drained by the story I wasn’t up to writing a review. And now you’ll never know! Oh wait they made a movie series…which I also watched two of and skipped the third.

I was born and raised out on the fringes of the rainy Pacific Northwest on fishing boats and cold beaches with only a dog and kittens for company, and so my love of reading and creating stories started very early. My dad would illustrate my early stories and I would listen to him ramble about European history and warfare, eagerly asking questions about Kings, Queens and our own family history. In my adult life I am wife to a brilliant and hilarious web designer and mother to two wonderfully weird children whom I am trying to pass on to my love of learning about the world. I'm an amateur genealogist, amateur photographer and amateur history major haha. I'm good at doing amateur stuff lol. During the last couple years I finally turned my life-long urge to write into a serious endeavor and finished my first novel called (for now) The Stone and the Stars, about a dying dystopian society, and one girl trying to escape it before it collapses. While I finish cleaning up the edges on my novel for the umpteenth time, and before I send it out into the world, I've lately begun a novel about utopia, this time on Earth. I'm finally living up to the nerdy book-worm title my family 'lovingly' pinned on me from the time I was small, and finally doing that one thing I feel like I was born to do. Cliche and silly? Yes!
View all posts by Deanne →
Tagged  Catching Fire, Jennifer Lawrence, Katniss, Peeta, Suzanne Collins, The Hunger Games, YA.
Bookmark the permalink.