The Lady Queen: The Notorious Reign of Joanna I by Nancy Goldstone In 1348 twenty-two year old Joanna, Queen of Naples (part of Italy at the time) and granddaughter of famed ruler Robert the Wise, stood before the Pope to answer the charges of murder in the brutal death of her husband, and it wasn’t the last time Joanna would have to fight for her life and crown.

Women rulers were exceedingly rare at this time, and Joanna really had her hands full of it managing her husband(s) who were always after her power. Joanna was a deeply pious Christian Queen at a time when Christendom was rent by the quarrel that saw two popes on the papal throne at the same time in Europe. She constantly had to defend her kingdom from invaders, especially the invaders who were her own not-so-distant family, carefully choose which Pope to back; and watch her back in her own court at the same time. Despite the odds, she held onto her throne for thirty years! 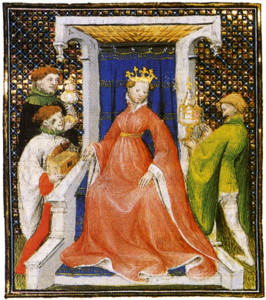 “De mulieribus claris” by Boccaccio, 1403, a portrait of Joanna I

As far as historical queens go, I thought Joanna’s story trumped (nearly) everyone, including Mary Queen of Scots, which is pretty, pretttty hard to do. It’s definitely up there with some of the most well-known and brave women of history. It baffles me to this day that no one has heard of or talks about Joanna. That’s the fault of historians and writers by the way, so I really applaud the monumental task Goldstone had in finding evidence for this medieval queen.

I really wanted a happy ending for Joanna but SPOILER (as far as a seven hundred year old fact can be spoiled):

Her bones are STILL at the bottom of some random well, no one has properly laid her to rest. If that doesn’t tell you a bit about the dangers and injustices she faced in her life (and death) I dunno what would. Besides her inglorious end, I really believe she was one of the greatest Queens of the ages, and it’s shockingly bad manners that history has ignored her.

Naples in the time of Joanna’s grandfather, Robert the Wise, about 1340.

I really enjoyed it although it was hard to delve into a country and it’s internal names and politics I am completely unfamiliar with- medieval Italy- but the author did a fantastic job of keeping the reader straightened out. I’ve read Nancy Goldstone before and I think she is going to be as well known as Allison Weir someday in the non-fiction sector.

Because it’s non-fiction it isn’t the most fast-paced exciting thing to read for anyone unused to the format, although as such it is fluid and easy to read. I would love a great author of historical fiction to give this Queen, ahem, the royal treatment. I’ll see myself out.

Oh- here’s the cover of the book I have, I like it better. 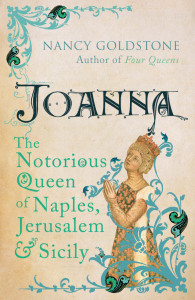 I was born and raised out on the fringes of the rainy Pacific Northwest on fishing boats and cold beaches with only a dog and kittens for company, and so my love of reading and creating stories started very early. My dad would illustrate my early stories and I would listen to him ramble about European history and warfare, eagerly asking questions about Kings, Queens and our own family history. In my adult life I am wife to a brilliant and hilarious web designer and mother to two wonderfully weird children whom I am trying to pass on to my love of learning about the world. I'm an amateur genealogist, amateur photographer and amateur history major haha. I'm good at doing amateur stuff lol. During the last couple years I finally turned my life-long urge to write into a serious endeavor and finished my first novel called (for now) The Stone and the Stars, about a dying dystopian society, and one girl trying to escape it before it collapses. While I finish cleaning up the edges on my novel for the umpteenth time, and before I send it out into the world, I've lately begun a novel about utopia, this time on Earth. I'm finally living up to the nerdy book-worm title my family 'lovingly' pinned on me from the time I was small, and finally doing that one thing I feel like I was born to do. Cliche and silly? Yes!
View all posts by Deanne →
Tagged  Italy, Joanna I, Medieval Queens, Nancy Goldstone, Queen of Naples, The Lady Queen.
Bookmark the permalink.